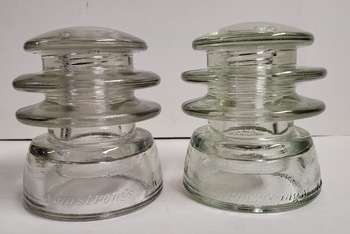 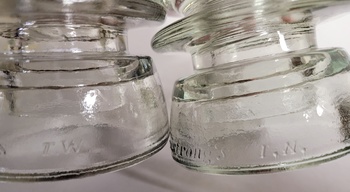 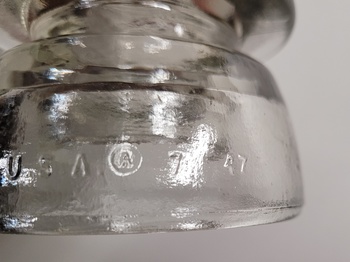 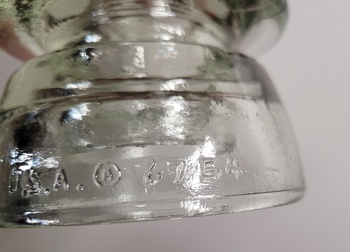 A couple glass insulators I picked up today. These are in mint shape, no chips. They were a little dirty, so I cleaned them up.

These are Armstrong's insulators. The one on the right has a green tint...this is due to the iron content in the glass. Collectors call this aqua.

ARMSTRONG CORK COMPANY
A few interesting facts:
"Whitall Tatum was purchased by Armstrong Cork Company in 1938. Armstrong had long used an “A in a circle” as a trademark."

"the “A in a circle” was apparently first placed on their insulator molds about 1941 (three years after Armstrong took over), and, meanwhile, the WT in a triangle mark was phased out gradually, over a period of quite a few years, from approximately 1941 to 1949."

"Armstrong Cork Corporation purchased Whitall-Tatum in 1938 (with insulator production continuing at a remarkable rate, and the existing molds being re-engraved with the ARMSTRONG name between 1946 and 1949), and finally Kerr Glass Manufacturing Corporation took over ownership of the plant in April of 1969. Many of the insulators continued to carry the “Armstrong” embossing, until about 1973, by which time all carried the “KERR” embossing."