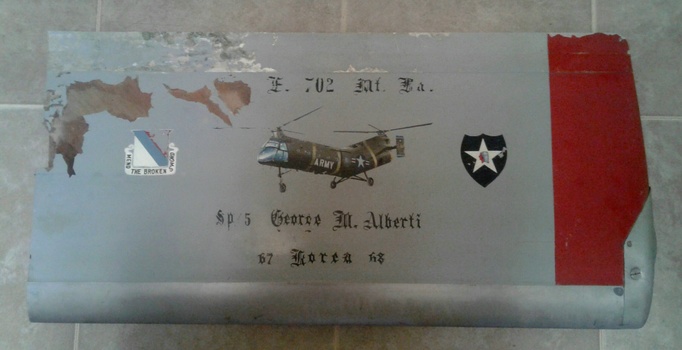 Now here's something you don't see everyday! A few years ago a friend of mine was downsizing and moving into a condo. While helping empty out a shed I spotted this. He had planned to just leave it. I asked if I could add it to my stuff. It was. While he was based in Korea during his first tour during the Vietnam War he was part of an air supply group. Can't recall the full story of this but I'm assuming it was a damaged rotor set aside from a replacement of a new blade to one of the Piasecki H-21 choppers. Somehow he was able to salvage the tip from it and had it shipped home to Texas where he lived at the time. He was later transferred to actual combat as a door gunner in a different type huey. He told us stories of some of his sorties but I can't share them here. When he returned home after his tour of duty he had the blade tip painted and hand lettered with his name, rank, patch and assigned outfit. Blade is made of aluminum leading and trailing edges and tip and laminated wood main body. It'll be donated to a museum at some point. In the meantime it sits in my living room.