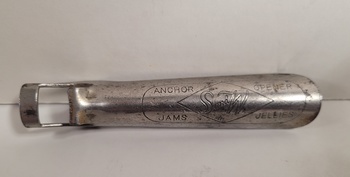 Found these yesterday. The can opener has no marking other than, "tool steel tempered". So ...as the seller stated.....doubles as a weapon..ha ha.

The other is an S and W anchor opener. Very interesting, see below to find out more about these 2 companies.

WHAT FAMOUS COMPANY EMERGES?
"The Hocking Glass Company was founded in 1905 by Isaac Jacob (Ike) Collins in Lancaster, Ohio, and named after the Hocking River. That company merged with the Anchor Cap and Closure Corporation in 1937. ... In 1987, the Newell Company acquired Anchor Hocking Corporation."