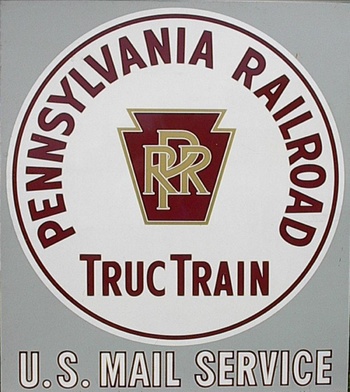 I was alerted of this rare sign being made available some 20 years ago and jumped on the chance to own it. The guy was going to actually cut it up and use the metal (sheet aluminium) for other projects. It is most likely a one-of-a-kind. It is the "sample" sign designed by a sign company (the guy I purchased it from is a son of an x-employee there) in Pittsburgh for the new "Flexi-Van" Trailers the PRR purchased from the NYC in the early-mid 1960's. After the PRR approved the design, the production signs were made and would have been installed on the Flexi-Van containers. What is now unique about this sign is it is probably the only one that includes "US MAIL SERVICE" text. In the late 1960's when the PRR lost the contract to carry the mail, they were required to modify the signs on the Flexi-Vans. They did so by cutting off the "US MAIL SERVICE" wording and leaving the rest alone. So, again, most likely all those in service signs were modified, leaving this sample sign as the only example having the complete signage. Sign is approximately 4'x5'. Absolutely MINT condition still!