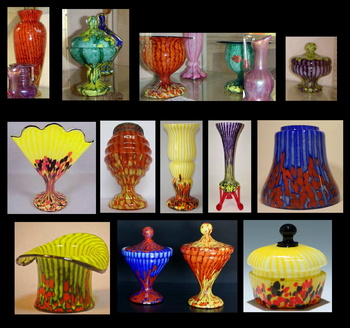 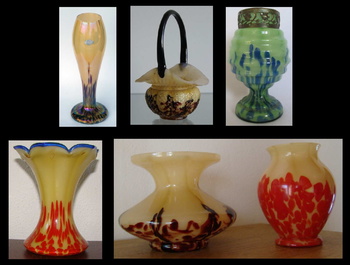 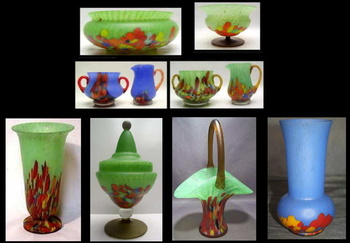 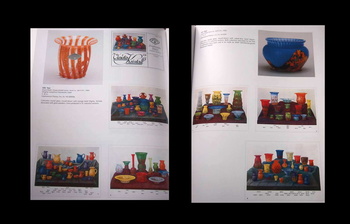 In the very infancy of my research, I had very sparse leads I could follow. Among those limited resources was a single case in Passau which contained 19 pieces of glass by Welz. Luckily, one of them, which would later be found in production literature I discovered, had a FWK label on it. With these pieces, many of which were in a décor I would call “lines & Spots”, I started a search to identify more shapes and decors.

The top row of pieces in image 1 are a few of the Welz examples in Passau. The other two rows show some additional examples I located and identified over time. Keep in mind that at this point in time, the firm of Franz Welz was basically an unknown entity.

In the process of researching I also came across a line of glass which I confirmed to be Welz production. That was a line I refer to as Translucent Lines & Spots. This line showed me that Welz did do some work with translucent decors with patterns. Some of that production is in image 2.

One of the things that occurred very early on, was I located some images of what were at the time production which was unknown to me. Image 3 above shows some of those pieces. Because of their strong similarity to the “Lines & Spots” décor, I catalogued those items as a potential variant of the Lines & Spots décor by Welz. When my website started to go public, I still had not found anything which would confirm a suspicion that the décor was Welz, and they did not go on my site.

A number of years later, I was introduced to a period ad by the firm of Josephinehütte with a selection of glass they identified as Vineta Kristall. After a handful of years holding the suspicion that the glass might be Welz, my suspicion was confirmed to be incorrect. This type of research has been the long standing foundation for my work with Welz.

Image 2 above shows some examples of Vineta Kristall.

I could not find it at the time of posting this, but if I can locate it, I will add the advertisement I am referring to.

6/9/21 Edit: The publication showing the Vineta Kristall was not an ad, but a book. It identifies the production as being Josephinehutte, but also seems to state that the first attribution of the glass was mistakenly WMF. I have added the information in the 4th image above.