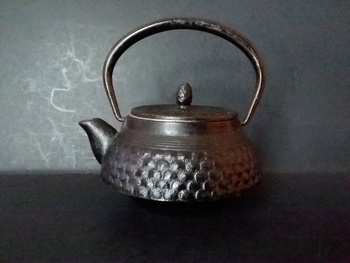 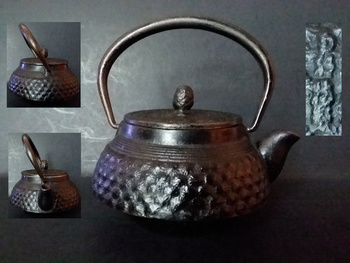 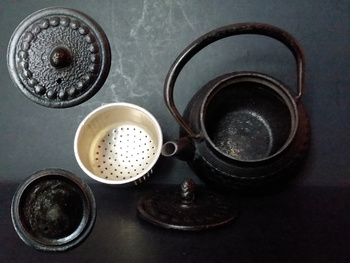 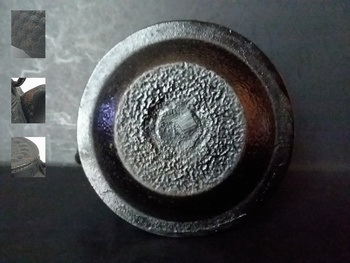 This flower inspired tetsu kyusu is 4.5" in diameter and 2.5" high, minus lid, spout and handle. It weighs 1 lb 5 ounces and holds about 8 ounces of water. The maker's mark is on the top side of the pot to the right of the spout when facing it. It has its original aluminum infuser, so I date it to 1950s-1970s. It has been very gently used as there is some build up of minerals inside and the pot is lined but in a style I see only in older pots. I think the flowers on the pot are chrysanthemums.

Based on what I can read of the mark and the nature of the grind on the bottom of the pot, I believe it was made by either Oitomi or Oigen. Oigen, especially has some rough grinds of the mold sprue on the bottoms of their pots.

This pot was rusty but did not seem too bad based on the seller's images. I have some insets in image four which show some of the rust. There was what appeared to be light rust all over the pot. I first brushed it with a stiff nylon brush to remove and dust, dirt, debris and loose rust. This showed that the rust was thicker and more hardened in some areas than it had seemed at first glance. I brewed a few cups of green (green/jasmine, actually) tea and used my preferred method of rubbing the hot pot with a paper towel soaked in the tea and let it dry. Over the next couple of days the rust did darken and started sealing but I was not satisfied with the roughness and thickness of the rust. It was going to be very noticeable even when fully darkened.

After a bit of thought, I decided to try a product (Big 45 Frontier Metal Cleaner) I have used many times on firearms with rusted finishes. It does a great job of cleaning up rust without removing the blued finish so I thought it might also work on the traditional urushi finish on this pot. It is a metal scrubbing pad but works much better than steel wool or stainless steel scrubbing pads. So, I covered the rust spots with a bit of olive oil and gently scrubbed one of the rusted areas and it removed the rust without disturbing the urushi finish. Cool! I was still fairly conservative in my efforts and probably could have gotten more rust off, but I am going to continue to use this pot and wipe it with green tea and see if that will eventually blend the areas which were rusted into the rest of the finish. I may repeat the process later, if I don't like the results. So this was a successful experiment. I have another very rusty pot which has a green colored urushi finish which I plan to try this on later.