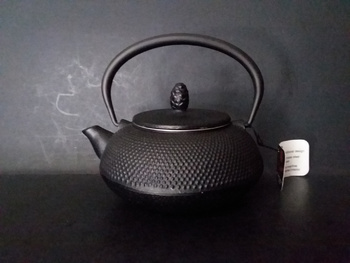 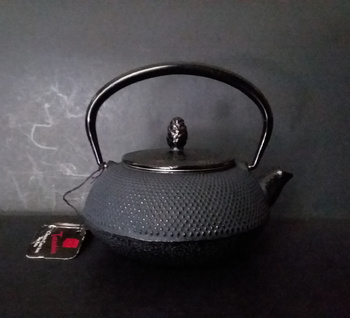 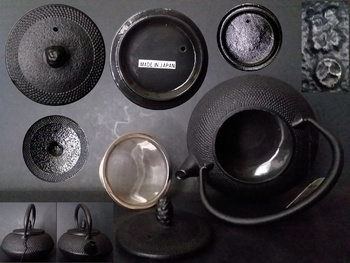 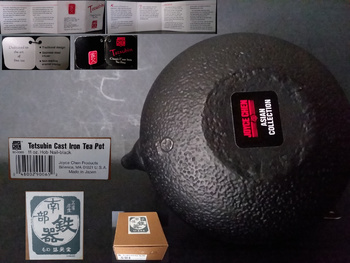 The Japanese tetsu kyusu in the first two images are both "New, Old Stock" pots, one with box and one without. They are close but not identical in dimensions and weight. Both are roughly 2.25" high and 3.75" in diameter, minus lid, handle and spout. The boxed pot's weight is 1 lb 10 ounces and the pot with no box weighs 1 lb 8 ounces, which is a pretty big difference. Both hold about 8 ounces of water. Both pots were made at the Oigen foundry. The pot in the first image is shown in images three and four.

The boxed pot was about $30 shipped. The seller was asking $30 for it and I made them an offer of $15 which they accepted. The pot with no box was $18 shipped.

This was an experiment. The seller did not show the foundry mark in their images for the pot with no box and I was curious to see if the pots had been made by the same foundry as they had some subtle differences. I was also interested to see if the dimensions and weight were the same since JC advertised them as "handmade". I was somewhat surprised to find that, yes, these pots are hand made, not created from stock molds, and finished at the discretion of the artisan, or maybe at the direction of a supervisor. Nice.

Two pots made for a pretty cluttered post, but I did not think two posts were warranted and comparing the pots would be easier in one post. Third image contains comparison of the lids from both pots. The urushi lining of the pots was close enough that I did not think it worth squeezing in another image.

BTW, the boxed pot had a lot of rust all over the pot but I thought, since is was basically new, the rust would be light and just from sitting on a shelf for some number of years. The rust was easily removed with a paper towel, but I think I will need to be used and wiped down with green tea to prevent it from recurring.