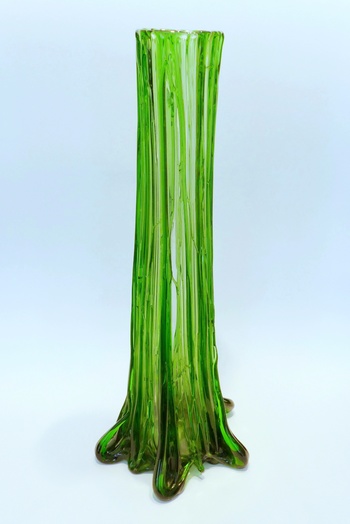 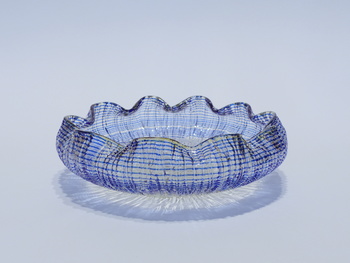 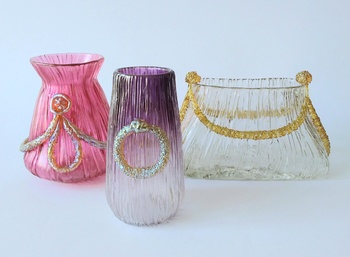 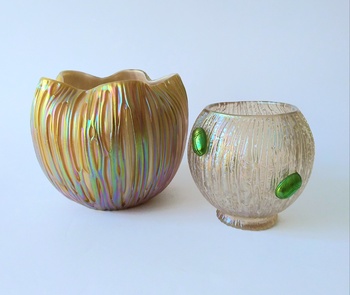 A decor with vertically spun threads was shown for the first time at the World Exhibition in Paris in 1900. A jardiniere (PN II 423) was exhibited there. According to the cutting book, this could be a Hofstätter design.
With these objects you can see very well how a principle, which was worked out once, could be used again and again for new design possibilities.
This design element of vertical threads was the basis for some other decors, such as: "Blitzglas" (crystal) "Empire", "Boule Boule", "Gloria", "Version 102" etc.
The 54 cm high vase Decor Texas PN II 1188 (1904) was blown into colorless glass and then spun over with green vertical threads. Five feet were then pulled out of thick glass threads. This vase is the largest of a five-part series in this form (PN II 1186 - PN II 1189) and was made for Ludwig Fränkel, Berlin and for Boudon & Klähr, Paris.
Here are some more examples: Blue spun flashing glass (the PN is unknown), candia Texas with silver, Empire-PN II 2586 - Pensee 'running Texas, Empire- PN II 4180 and Rosalin Texas, Empire- the PN is unknown. Also the decor Silveria PN II 2120, and the Version 130, PN II 2115, crystal with green beetle overlays are based on the principle of spun threads.