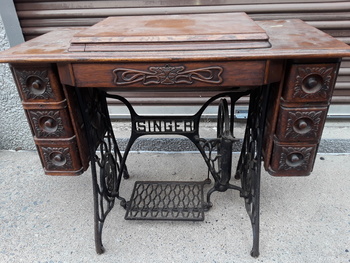 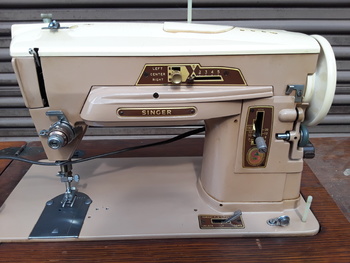 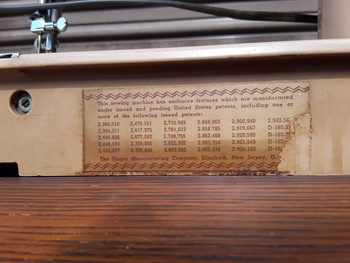 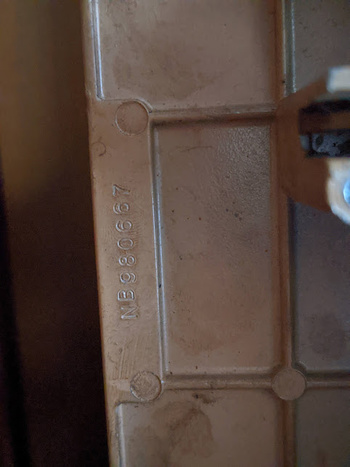 Whether good or bad I don't really know but it was quite the surprise when (after moving to storage, mind you...) I finally actually opened the lid on this lovely old oak SINGER treadle style cabinet (pics 1 & 2) expecting a likewise antique machine to be within -- but that is *not* what I found as pics 3 & 4 show. (ooops...) Guessing (only) that the machine is maybe half the age of the cabinet, somebody did a nice job on the retrofit and the machine has enough extra levers and stuff to maybe suggest it is a much more fully-featured thing than the original would have been, thus a genuine "upgrade". Its patent numbers label is shown here along with the machine itself, but I didn't find any actual date or model/serial number for it anywhere I looked. The six drawers and tilt-open compartment between them still contain assorted machine parts, thread, bobbins, and sewing notions, including an instruction booklet for a "Model 99-24 Electric Sewing Machine" which is not at all what this machine is but looks much more like what I was expecting to find...even that probably wouldn't have been the original machine in this cabinet with its treadle pedal. (or, were the early electric machines also fitted with the treadles too??)

OH, WELL -- I'm certain somebody here (hello, keramikos! <waving>) will likely speak up with more relevant detail of what I've got here so all of us can learn a little more...any way about it an interesting machine, maybe...??