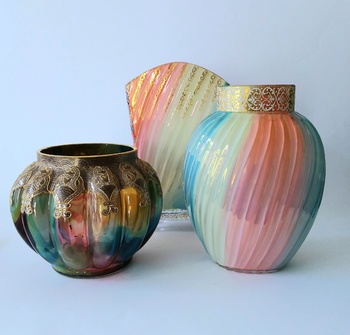 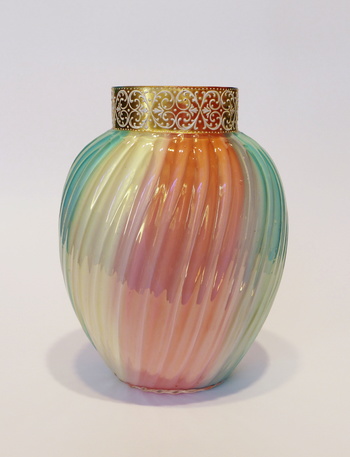 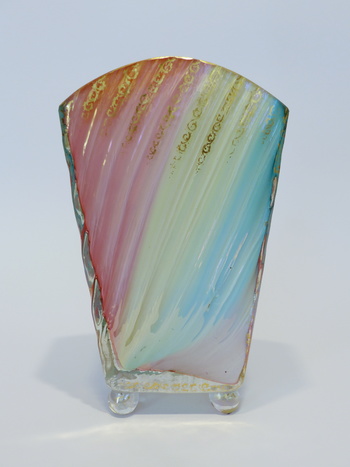 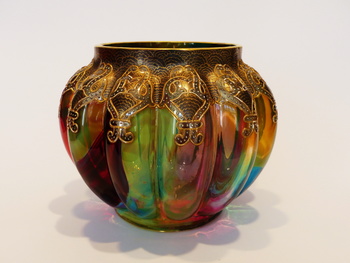 The rainbow glass is mentioned in Ackermann's Illustrierter Wiener Gewerbe-Zeitung in 1890 and shown in an exhibition in the Kunstgewerbeverein Wien in 1891. According to Loetz.com in the article by Dr. KM Hasselbach, the rainbow vase (PN I / 1582, 1885-87) was one of the first decors to which Surface iridescence was applied. Some small vases were made for Boutigny in Paris (PN I 89 / LB 4 and PN I89 / LB 5). According to Lötzbuch (Ricke), only a small number of rainbow glasses were put on the market. In 1906 and 1907 the following entries are found in the cutting book: 1906 PN II 3650 rainbow glass crystal spun, 1907 PN II 5010 rainbow glass crystal spun. In the 20s, the decor was reissued. In a note from 1922 on the section PN III 1881 it is written: square-optic rainbow and tight-optically rotated rainbow. In the Sumavy Museum there is an object with a rainbow decor, twisted, narrow-optical, section number PN III 4287, but the rainbow decor is not noted on this section. The last notes about rainbows I found in PN III 3570, III 3572 and III 3674, it cannot be ruled out that this decoration was carried out until the end of production.
The rainbow vases with a white underlay were previously ascribed to other glass companies, but the painting's mark on individual pieces means that these can be recognized as Loetz.
This proof that the rainbow vases with opal are products of the Lötz company has already been provided several times on CW. So far I have hardly seen a product from a later time, I only know that in the Lötzbuch (Ricke) shown piece on page 300, number 369 and, as I said, the PN III 4287 also in Bergreichenstein.
But there are also a large number of rainbow glasses from other manufacturers.
I couldn't assign a PN to these three vases you see here. The bulbous vase (22.8 cm) with the edge painted in gold and enamel is decor1/32 and is therefore to be regarded as a Lötz product. The fan-shaped vase (22.8 cm) came to me from the USA. The ribbed, intricately painted rainbow vase is one of my favorites from the company's early production days. Its painting is very similar to that of the vase shown in Waltraud Neuwirth's book "Loetz Austria 1905-1918" on page 29.