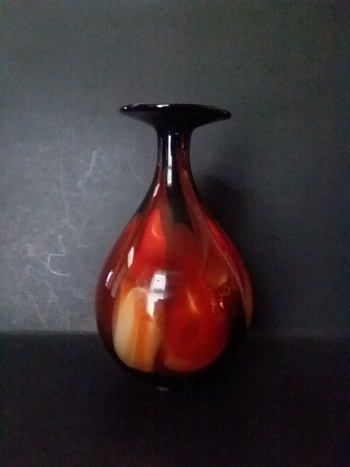 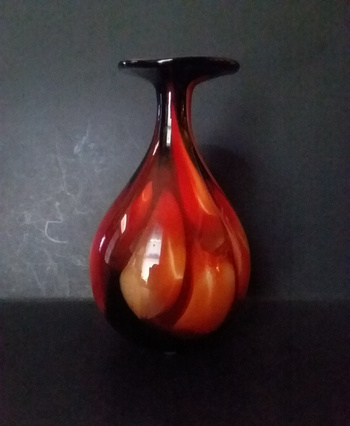 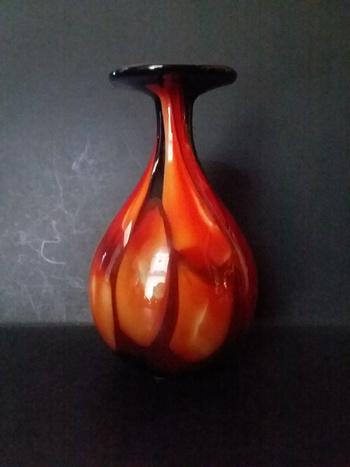 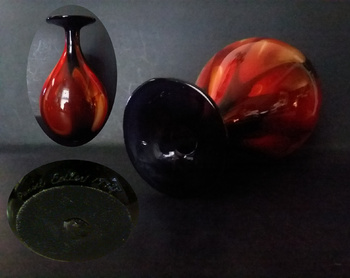 This melon vase by Daniel Edler is 8" high. This is my second early piece by Edler which uses black glass as a base and nitrates to color the other glass. This is a pretty well done piece for this early in the American studio art glass movement. The black sections are fairly transparent.

I have been looking for a second piece by Edler to balance the other vase by him in my collection and this one was waiting for me when nature called in the wee hours of the am. A new listing on an online auction site, already with two watchers, so I made up my mind in just a couple of minutes to buy it, since the price was reasonable, the seller has a lot of excellent feedback and ships some scary complicated, fragile glass/pottery. I should just start wearing a diaper to bed. I would get into less trouble.

I thought my next vase by him would be a later, more complex piece but I guess not. My first vase is posted on CW and contains information Edler gave me in a telephone conversation about how he made these early vases and more about his career as an artist:

Daniel Edler is an Illinois studio glass artist and falls into the first wave of American studio glass artists. Edler became interested in art glass in the mid 1960s and attended a glass workshop given by American studio art glass pioneer Harvey Littleton in 1964. He earned a BA in Architecture in 1962 and MFAs in Visual Art & Pottery and Sculpture in 1965. His early interest was in architecture and pottery and he taught pottery making at a progressive school. He earned national recognition and awards for his pottery work. He started to seriously work as a glass artist about 1968 after taking his students to an art glass studio to introduce them to glass art and to learn how to set up a glass blowing studio at his school, Scattergood in West Branch, Iowa. He was one of the founders of the Glass Art Society in 1971 and is a charter member. He was invited to be a guest artist at Stuart and Sons Crystal in Stourbridge, England in 1971 and afterward was a guest artist at several well known glass working schools and companies in Europe. He returned to the U.S. in 1972 and received a grant from the National Endowment of the Arts to work as a resident glassblower for the state of West Virginia. At that time, West Virginia was still the location of numerous well known American glass houses. He was employed by the Fenton Art Glass Company in 1973 to develop a contemporary art glass line. He decided to open his own studio in 1974. 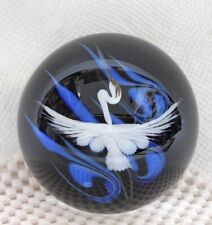