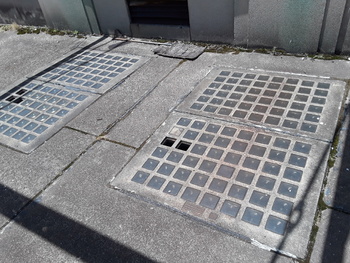 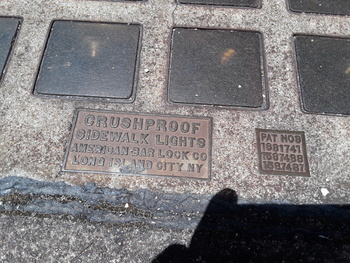 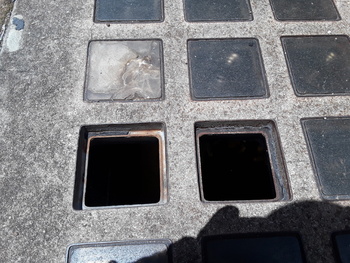 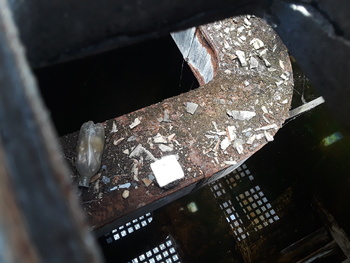 These remaining installed in Texarkana near their train station, in front of an old hotel building currently in some sort of preservation/restoration project, at least as far as the "we know we've still GOTS it, now how do we FIX it?" (read: pay for it!) stages...oh well, at least they're thinking in the right direction anyway...??

For those completely unfamiliar, these two side by side 'panels' that form the surface of the sidewalk are actually quite sturdy steel/concrete frames holding clear very heavy glass prism-ish 'lenses' of sorts (these appear to have a round fresnel pattern to them on their undersides, other makers used different forms and shapes for the glass) which in function transmit and magnify sunlight on the sidewalk downward to provide natural illumination to a 'basement' area or room located immediately underneath the sidewalk.

Pic 1 shows both lights here, each missing a couple or three lenses now. Pic 2 is the cast iron manufacturer's name and patent number plaques. (only on one panel) Pic 3 is a closeup of two missing lenses with the LH one above intact but damaged/chipped on its street side surface. Pic 4 is looking down through one of the missing lens holes showing a rusty metal air duct hanging in there with the debris it has collected, as well as the reflection of the sunlight through the lights in the standing water on whatever floor exists below.