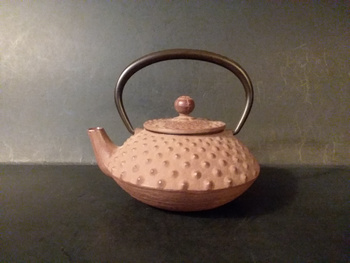 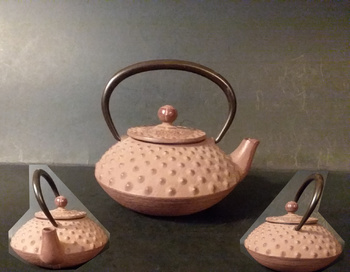 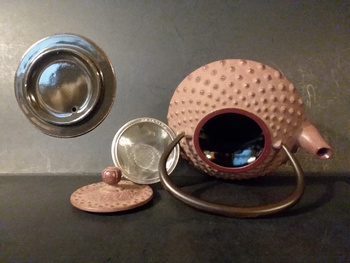 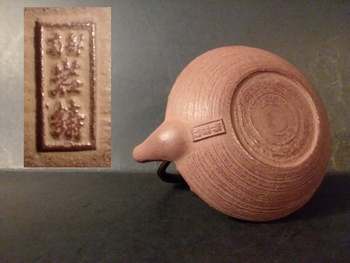 This Iwachu testu kyusu is about 2.5" high and 5" in diameter, minus spout and handle, and weighs just under 2 lbs. I have never filled it with water to measure the volume but guess it holds 8-12 ounces. This one has the Heisei mark (1989-2019) but is unused and in new condition. This color is the second most common/popular for this style, next to traditionally finished pots. I have seen at least two other sizes of kyusu in this style and color, but this size seems most common. I paid under $20 for this one, including shipping, so it was hard to pass up since, at the time I came across it, I did not have another pot in this style and size in my collection.

One way to tell that this is a newer pot, beside the mark, is that it came with a wire mesh infuser as opposed to one made of solid aluminum. It is an attractive little pot and, though I have had it for quite some time, I have never used it. I have never seen a Showa Era (1926-1989) pot in this color. One way that Iwachu coped with increasing competition, mostly from China in the last years of the 20th century, was to start producing a dizzying array of styles and colors of tetsu kyusu. I suspect that this color was a part of that effort.

As is often the case with these small testu kyusu found in the U.S., it was probably used as a decoration or paperweight which is why small Japanese pots are often found in new condition. I have found pots dating to the 1950s which look, and are effectively, brand new.