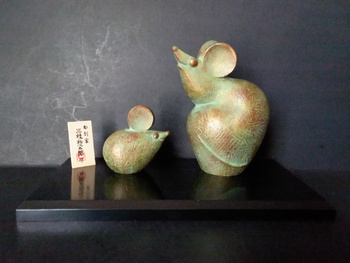 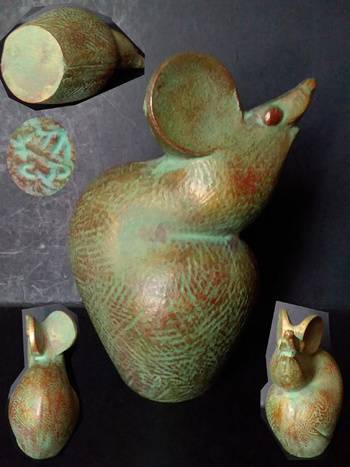 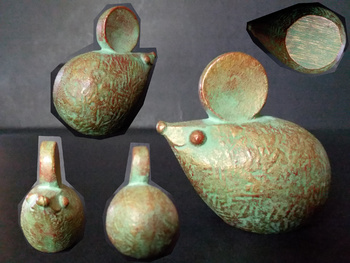 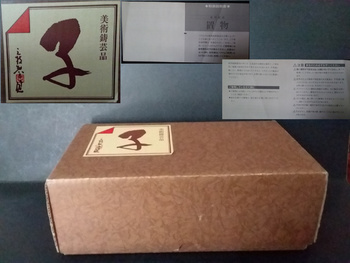 This is a boxed set of mother and child rats by Saegusa Sotaro. The mother rat is 5.5" high x 3" wide and made of iron. It weighs 1 lb and 11 ounces and has Saegusa's mark on it. The small rat is 2.75" high x 2" wide and made of some non-magnetic metal, perhaps bronze. It weighs 6.5 ounces and I cannot find any marking on it. The set is used but came with its original box and paperwork, plastic plinth and wooden sign. I initially called these mice but they are probably Zodiac okimono, so are rats.

I recently found a seller in Japan who had found a good size collection of the works of Saegusa Sotaro and was selling them at very reasonable prices, so I decided to add a few more pieces to my collection. I am not sure what I missed but he still had some nice pieces left when I found him.

This set ticked off a couple of boxes for me. First of all I was looking for boxed sets, for original documentation and some pieces in metals besides iron, which I really like, but I wanted some other examples of his work as I think all of mine are made of iron. A couple of early pieces acquired for my collection came in the original boxes and I put them away without testing to see what metals they were made of. So, this was a very nice find for me.

The mother mouse was larger than I had expected it to be, it is a real chunk.