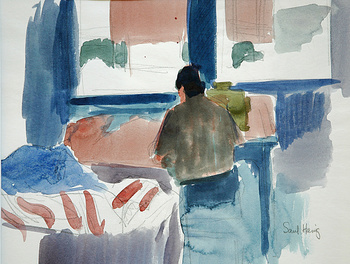 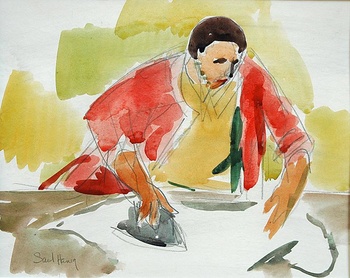 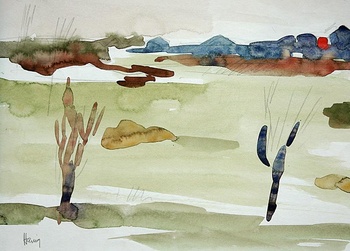 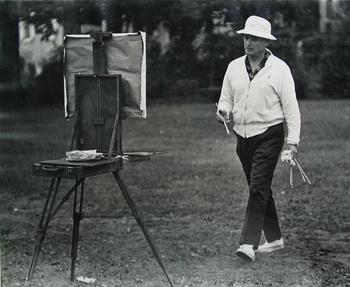 Around 15 years ago a stash of Saul Hanig's work found its way to ebay and caused a bit of fuss due to the unconventional style of this, at the time, obscure artist. After some intense interest in his work among collectors, he gained some level of posthumous recognition and it is now easy to find biographical and a bit of professional information about him, mainly because I did some in depth research and posted it to a couple of art centered web sites and to my art collection web site. It is still possible to find inexpensive examples of his work, which is often very charming. I wish that I had picked up a few more examples back when, but the bidding got a bit crazy after awhile.

Saul Hanig was born 3 November 1914 in Scranton, Pennsylvania the son of Hungarian Jewish immigrants Benjamin and Matilda Feuerstein Hanig. Benjamin Hanig worked as cap maker in Scranton for many years after immigrating to the US by way of New York City on 15 June 1902. Saul was in his family's home in 1920 and 1930. His name was given as "Solomon" in 1930. He had four sisters. Mr. Hanig married a woman named Theresa who was 2 years his senior. She died in Wilmington, Delaware on 15 December 2005. The paintings in my collection came from a sale of her possessions that was held at Kemblesville, PA. Prior to this sale the family donated about thirty of Hanig's paintings to the University of Delaware.

I was able to locate the son of Saul and Theresa Hanig who has provided information that I am including in this biography. I have not been able to discover where Hanig trained as an artist, but he studied under Nicolo Cortigilia, Roy C. Nuse, and Rosell Weidner according to his biography from an exhibition at the Delaware Art Museum in 1966. According to Hanig's son, his father had a scholarship to a university to study art, but did not attend. Mr. Hanig's son believes that his father was largely self taught, though I suspect he did attend some institution where he received formal training, but he probably did not graduate. Saul Hanig moved to Wilmington, Delaware about 1941 where he was employed as a sign painter in the advertising department of the Hercules Powder Company. He exhibited at the Everhart Museum, Delaware Art Museum, Baltimore Museum of Art, the Warehouse Gallery, and the University of Delaware. Mr. Hanig's son remembers that his father also had several one man shows. Hanig's work is part of the permanent collection of the University of Delaware. A 1942 edition of American Artist magazine notes that Hanig had won second prize in a pencil drawing competition.

Mr. Hanig's son remembers that his father studied with some teachers who lived in the Wilmington, Delaware area but did not recall their names. He also noted that his father did not travel much and that the subject of most of his work was done in the New Castle and Wilmington, Delaware vicinity. As can be seen from the paintings in my collection he frequently painted scenes from his home life. The woman ironing in the first painting is Mrs. Hanig. Mr. Hanig's son says his father habitually sketched and painted and that it was a normal part of his family's life. He also noted that Mr. Hanig's sign painting was done with a free hand and very precise, for example, he could draw 50 capital letter "E's" freehand and each one would be identical.

Hanig is not listed in any major art reference book that I have searched. Judging by the list of his teachers I believe that Hanig may have attended the Pennsylvania Academy of Fine Arts for a time. If so, he probably attended between 1935 and 1940. I really like the colors that he uses, and the sense of motion in some of his works. I normally do not like seeing pencil lines in watercolors, as they are usually just a guide for the artist, but in Mr. Hanig's work I feel they are part of the action of the works.