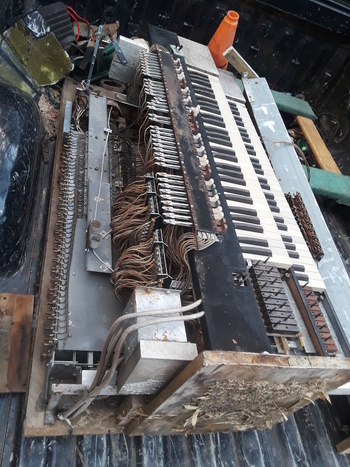 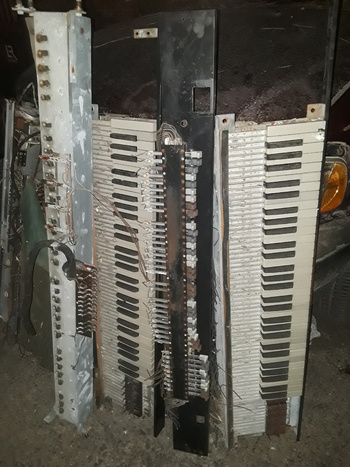 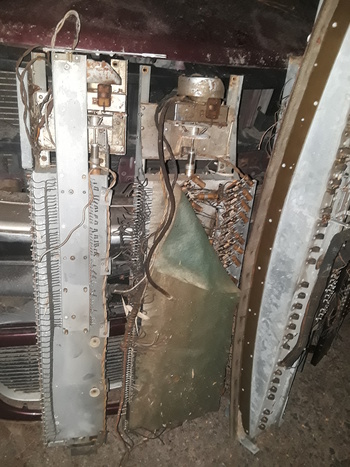 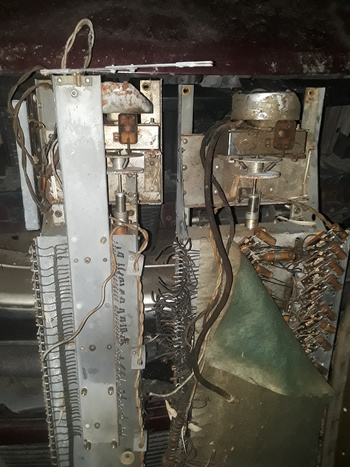 Some might remember this thrashed Hammond Concert Model E electric organ, which followed me home in the back of the truck after being unceremoniously dumped in the 'hood a couple years ago...

And now its time has finally come, to be reduced to pieces parts hopefully to eventually provide continued life to somebody else's Hammond organ somewhere else besides here. An "ORGAN DONOR" as it were, with any luck...?

Pic 1 here shows the remaining hulk of it as I began to dis-ressemble this afternoon. The majority of its wood cabinetry is already long gone, the weather and Mother Nature (and the water soluble 'hide glue' it was held together with) more or less took care of that automatically over time since I wasn't able to store this thing indoors -- I kept the upper (heaviest!) top part (with all these guts) covered up mostly, and had already removed all (the few) usable parts from the lower portion as gravity eventually took its toll. There are five major assemblies seen here -- one "drawbar base", two keyboards (we call them "manuals"), and two "tone generators". They *WERE* all connected together with several hundred little electrical wires as well as a bunch of bolts and screws -- all those got cut or otherwise undone as those assemblies came apart, in that order.

Part of me can't help it but to dislike tasks such as this when I have to do them, simply because I know *exactly* how many man hours of tedious but precise work it can take to do them in the first place... <groan>

Pic 2 shows both manuals separated, with the drawbar base leaning between them. The manual assemblies contain both the individual plastic playing keys and a rather elaborate contact/gangswitch mechanism underneath them (not seen) which I may or not disassemble further, eventually. Drawbars are the controls on a Hammond organ which send various pitched tones to the keyboards -- they are essentially just kinda fancy switch-type thingies and their base holds them along with a few other controls.

Pics 3 & 4 are the tone generator mechanisms. These two very similar contraptions are actually mechanical marvels full of spinning axles, springs, and things called "tonewheels" (with their associated electrical components) with motors at both their ends (pic 4 shows one end of each closer) which makes them both weigh prolly 80-100lbs each -- they might eventually need to be disassembled further as well.

The longest thing seen here (LH of pic 2, RH of pic 3) is actually the (foot) pedal switch and contact assembly which is the largest thing that used to live in the very bottom of the cabinet and as such, was already a 'loose part'.