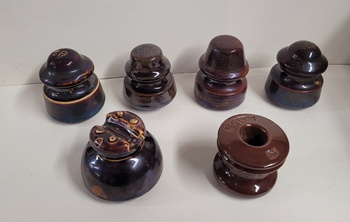 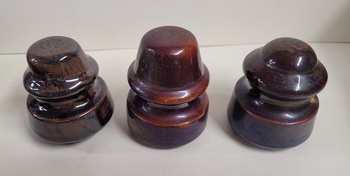 I have not posted anything in awhile. In Washington state we have had 51 straight days without rain. So I've been playing with my new hot rod truck and going to car shows and meets.

So... here is some brown insulators. I found lots of interesting information about these types of insulators and will post links in the comments below.

"Porcelain insulators had their start when local potteries began making telegraph insulators in the 1850's and 1860's. These crude early pieces were usually threadless and were produced in much lower quantities than their glass counterparts."

My insulators are later threaded ones..

"Porcelain saw very minimal use for either telephone or telegraph after the development of threaded glass insulators. Glass tended to be cheaper than quality porcelain, and was deemed better as it was thought that clear glass would discourage insects from building nests under the insulators reducing their effectiveness."

"With the advent of electric power distribution in the 1880's, larger and more reliable insulators were needed to carry the higher voltages of power lines, in the tens of thousands of volts. Glass at that time was not sufficient, and one man in particular, Fred M. Locke of Victor, NY, was convinced that porcelain was a superior insulating medium and began experimenting with clay mixtures that would produce finer insulators. In addition he was working to create new insulator designs that would hold up to high voltage service in all weather conditions."

Several different methods were used in the production of porcelain Insulators. Early ones were not very good, but they finally figured it out.

"From around 1915 on, the porcelain insulator virtually replaced glass on all electrical distribution, even at low voltages, as the superiority was demonstrated in both insulation quality and strength. To compete, some glass companies (Hemingray and Whitall Tatum) tried to mimic porcelain with amber insulators in the 1930's and 1940's! The smaller porcelain distribution pieces, although typically brown, were also provided in many colors. These were provided as markers (Green for series street light circuits, Yellow to denote a power line on a telephone pole, etc.) or to identify different utility company lines or circuits."