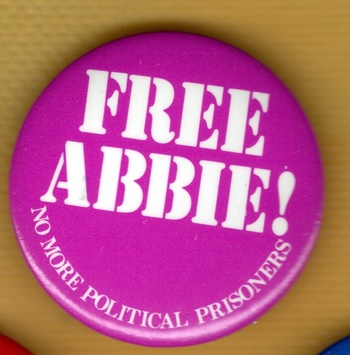 Abbie Hoffman (1936-1989), one of the "CHICAGO SEVEN" a superb and creative agitator for peace, justice, and America, was also the founder of the YIPPIES (the YOUTH INTERNATIONAL PARTY), was arrested and charged on a trumped-up drug offense in 1973. He jumped to a new location (Canada) and later, a secret location in upstate New York. While the FBI was searching for him, Abbie, a friend, and fellow activist kept in touch with us using the pseudonym, Barry Freed. His Massachusetts accent was always recognizable. He asked us to make up this pin to keep his name before the public during his imprisonment after he surrendered in 1980 and spent a year in jail.