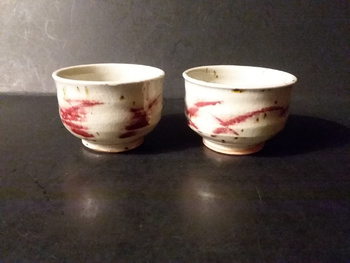 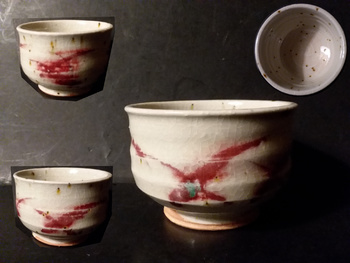 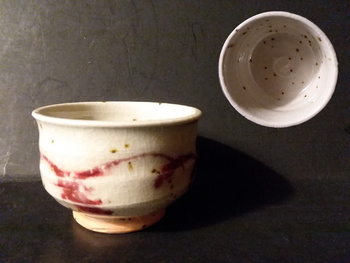 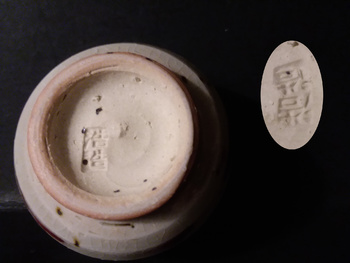 These sake cups are about 2" high x 2.5" in diameter. Each has a kiln mark stamped on the bottom. They are pretty thin, except for the bases, which are sturdy and unglazed. The red glaze does no appear to be iron oxide, which is commonly used on Japanese pottery to make reds and browns. I have not been able to decipher the kiln mark.

I bought these from a seller in Japan very cheaply, with free shipping, so the seller could not have made much of a profit. Generally speaking, Shigaraki pottery appears to command pretty high prices, so these were an incredibly good deal if I can correctly attribute the marks. I am always on the lookout for interesting sake cups and this is a nice set.

"Shigaraki ware (???) is a type of stoneware pottery made in Shigaraki area, Japan. The kiln is one of the Six Ancient Kilns in Japan. Although figures representing the tanuki are a popular product included as Shigaraki ware, the kiln and local pottery tradition has a long history.

The name Shigaraki describes a collective group of ceramic products made in a similar geographic area. Shigaraki ware is said to have begun when tiles were constructed for the Emperor Sh?mu’s Shigaraki-no-miya Palace in 742. However, evidence has shown old kiln remains in the ruins of Shigaraki village dating back to the Kamakura period and early in the Muromachi period. It is suggested that Bizen potters traveled to Shigaraki and began producing works there because early Shigaraki wares appear to have been influenced by Bizen wares. It is often hard to distinguish wares from both the Kamakura and Muromachi periods because of the embedded granules of feldspar that give both wares their striking appearance. "

Here is a similar pair with flask, described as "Benisai Red":

Calling this a mystery until I can sort out what the kiln marks say.