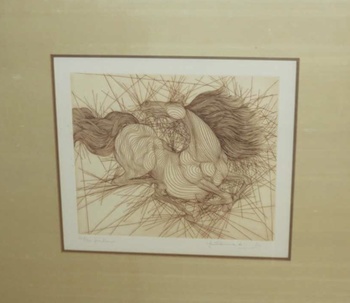 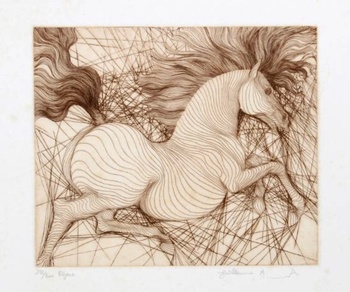 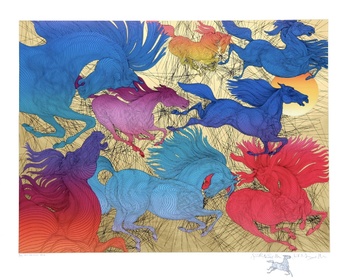 In 1978 I saw an ad in Architectural Digest that featured the art of Guillaume Azoulay. At that time I was very interested in horses. These serigraph art pieces drew me in. I had to have them. The sepia toned pieces, named Printemps and Pegasus were my first ones in 1978. In 2007 I added the colourful large piece “Huit Chevaux”. After all these years, I still find these pieces interesting and intriguing.

Guillaume Azoulay was born in Casablanca but his parents took him to Paris when he was 10. Azoulay is a self-taught artist who began making a living on the streets, sketching and selling his drawings, by the age of 13. His encounters with travellers from all walks of life ignited a passion for travel that saw him hitchhike from Paris through Europe and the Middle East at the ripe old age of 14.
Azoulay has made the world his training ground and uses his memory and imagination to draw his subjects with a fluidity that has garnered international recognition. His drawings of dragons, horses and dancers evoke graceful movement in their line-work. He is known as, "King of the line" - and he has been known to create a single work of art without lifting his pen from the paper.
In 1978 two of his pieces were accepted into the permanent collection of the Louvre Museum in Paris. At the time the chief curator said, "He is an artist whose varied works let us predict a very bright future." He is the youngest artist to have his work featured in the archives of the Louvre.
Guillaume Azoulay has used his art to convey feelings of gratitude for his Jewish heritage and he is known as a generous contributor to many charitable organisations.
Azoulay has also been able to count many heavyweight international figures outside the art world among his collectors, from President Ronald Reagan, President Sadat of Egypt and President Francois Mitterrand to Prince Rainier and Prince Karim Aga Khan. His works can also be found in the Nelson Rockefeller Collection.