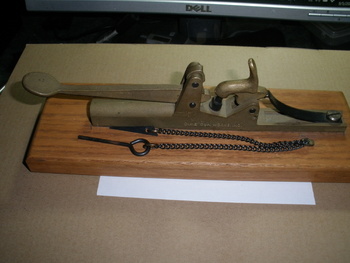 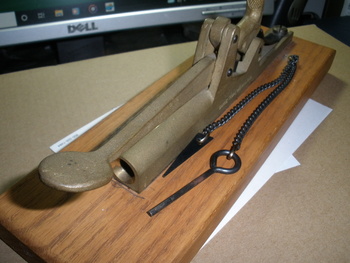 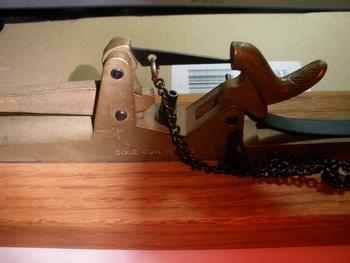 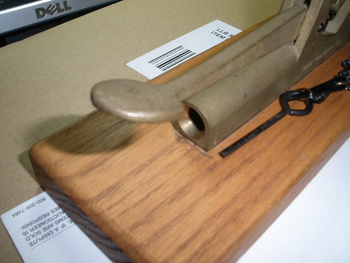 This is a replica of a American Civil War era ( 1862-63) Cannon Mouse killer. Even though it is a replica, it still is rare and hard to find.
They were last made in the 1970's and marketed by the Dixie Gun Works.
It is sometimes called "the Tennessee Mouse trap" although the true name is the "Cannon Mouse Killer" So, how does it work?
The bait is attached to the bottom front of the paddle, located right in front of the muzzle. A percussion cap, similar to the type used on Civil War Muskets, is attached to the nipple under the hammer. You than put the safety pin into a hole located in front of hammer to hold the hammer from arbitrarily firing before you are ready. The triangular shaped trigger is carefully loaded between the bait paddle and the hammer. If the darn trigger holds without prematurely tripping, (very touchy at this point), You can slowly and carefully take out the safety pin, that, up until this point, prevented the hammer from slamming into the percussion cap and firing it off. It is now armed and ready to fire as soon as a critter trips the baited paddle. The concussion of the blast travels through the barrel and stuns the mouse.
I have three cats, and they have toy mice that they play with, I took the trap, a live percussion cap in place, and one of these toy mice to the basement and fired it off with the toy mouse in front of the barrel. the mouse flew across the basement and I haven't found it to this day. I believe that the concussion alone will kill a mouse. It maybe necessary to add a small black powder charge into the barrel, to discharge a rat. By all means .... DONT put a projectile down the barrel. That would be a tragedy waiting to happen.
Photo #1 shows the trap unarmed, photo #2 shows the safety pin, photo #3 shows the trigger mechanism arming the trap, photo #4 shows the bait paddle and the muzzle of the trap.