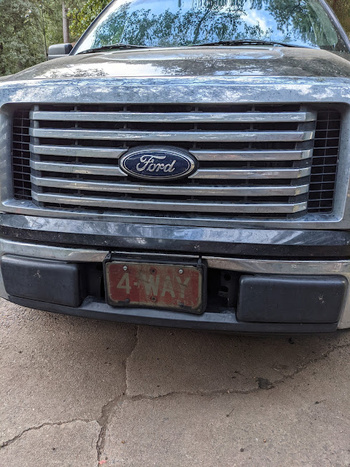 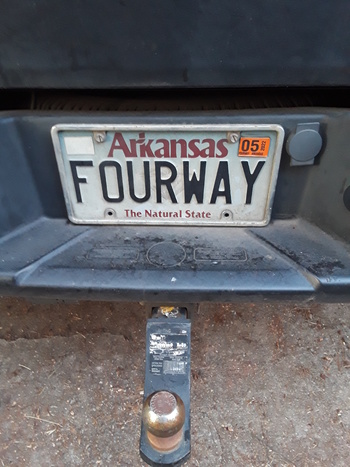 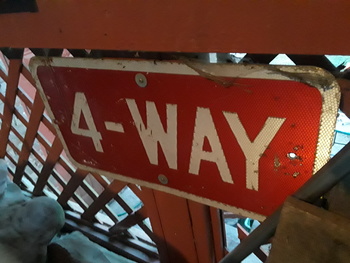 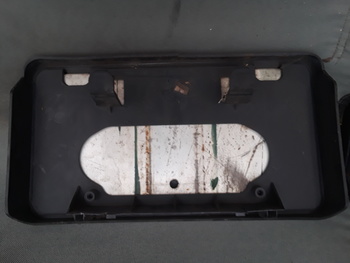 As promised when showing my other 'non' license plates the other day, here's what is currently on the front of my truck, along with some context why.... :-)

Pic #1 (&4) is it, in the FoMoCo plastic bracket and with one of those smoked plastic covers over it. What IS it?? An actual 4-WAY sign tab, that used to serve on a street somewhere posted immediately underneath a STOP sign. Looking closely at its lower RH corner the ARDOT 'signature' (of its time) can be seen as further evidence of its authenticity. Whodathunk it -- regular STOP sign tabs (2-WAY, 3-WAY, 4-WAY, ALL WAY, etc) are the SAME SIZE as a license tag...????

As a traffic equipment collector (with everything else) it seemed only natural that I should use the sign (rescued from a scrapyard as official surplus of AHTD) on the front of my truck, when its real license tag is what's in pic 2, and with pic 3 being the next standard sign size up from it, (its ARDOT signature at lower LH) mounted to the porch lattice opposite where my truck is supposed to park in the carport. (if, that is, the carport wasn't currently full of a buncha other stuff... <groan>) The particular sign on my truck was the most worn/faded of a few of them that came with that scrap load, I chose it then used the smoked cover over it to maybe cut down a little on its inherent reflectivity to hopefully avoid it being annoying to other drivers at night. I had to drill a pair of new holes in it as its original ones are in the middle to bolt it to a post, the paint marks from that post are still visible on its backside. (pic 4) 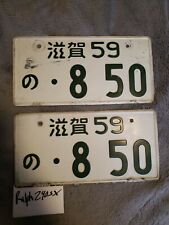