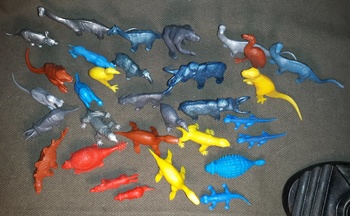 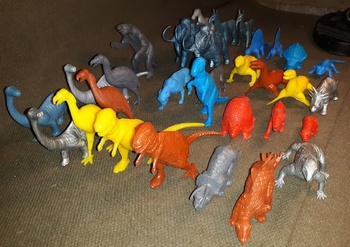 Here is my entire herd of MPC Prehistoric Animals. Most of these are slightly smaller versions of Marx dinosaurs. I am just going to call of these dinosaurs from now on as saying prehistoric reptiles and mammals. There are 20 different species represented here. They made a total of 24 so I have 4 to go. They were sold on two different cards with 12 each. One was all dinos and the other was a mix of dinosaurs and mammals. The card with mammals had 5 creatures Marx didn't make. They were Glyptodon a giant armadillo, Dire Wolf, a rat with horns (Ceratogaulus), Terror Bird, and the long nosed Macrauchenia. The yellow and blue pieces were cereal premiums and the others sold on a card.
No worries I still have more dinosaurs.