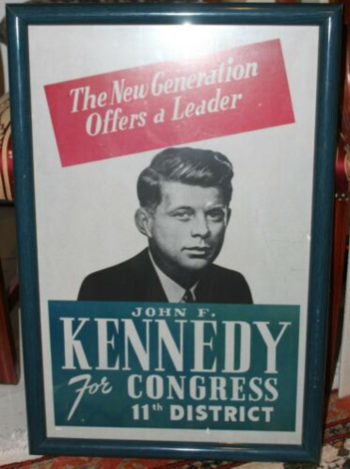 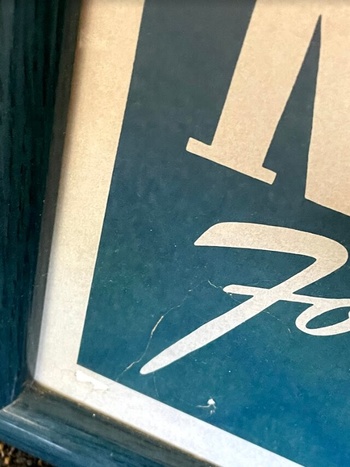 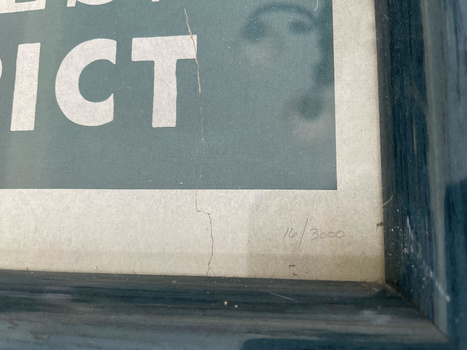 A JFK Poster: Tis a Puzzlement

It was a political campaign like no other. A World War II war hero and son of a prominent, well connected family in Massachusetts was running in his first election to Congress in 1946 with the slogan ‘The New Generation Offers a New Leader’- and won. He was 29. From there, the new Congressman from the 11th District would become US Senator and the youngest elected president of the United States in 1960 at age 43 - and an untimely assassination three years later. From there, history would eulogize John Fitzgerald Kennedy as a hero of the mythical fairy tale of Camelot forevermore.

A campaign poster was created for that campaign emphasizing his young age as a positive attribute with his slogan in red and white that says,‘The New Generation Offers a New Leader.’ His three-quarters dark profile, handsome even in black and white, a blue (more teal, really) block announcing ‘John F. Kennedy for Congress, 11th District’ all centered on a solid white background silk screened on standard 80 lb cover stock. Not stylish, not decorative; the poster is merely functional. But it must’ve worked since Kennedy easily won the primary over better known candidates. It's a rare poster as not many survived the 1946 campaign and few were even issued for the subsequent campaigns and few are offered at auction.

As with many Kennedy campaign items, the US Senate and presidential campaigns included, once the mythology solidified, auction prices for anything JFK skyrocketed over the years. Naturally, reproductions of early campaign posters, ephemera and some political memorabilia became the bane of many collectors, auction houses, and dealers. One such reproduction is the 1946 congressional campaign poster.

Luckily it is relatively easy to identify a reproduction. While the original campaign poster shows the profile of JFK overlapping slightly the original slogan, a facsimile poster shows the profile in a smaller size and not overlapping the slogan at all. All of the rest is exactly the same design in font, color and placement, except the required campaign authorization line is missing and the poster is markedly smaller than the original. The facsimile poster even uses the word ‘facsimile’ on the lower bottom on the left side (where the original had a union bug) with a handwritten pencilled number on the far bottom right side showing each poster was a series of so many of 3,000, presumably how many were reproduced.

Professional analysis of the poster definitely shows that the color of the printing is consistent with the period to at least the 1970’s, well after the campaign itself. According to Bryan Carrier, a retired professional printer and brother of the author, "There's no halftone in the face and the red and green solids aren't perfectly even. On an offset press the colors would be even, not blotchy [as it is here]. On a digital print the colors would be even and smooth...I would venture to guess [the poster was printed in] the early 70's. Offset was coming of age then. Copiers weren't that good. It only leaves screen printing." He also recognized the paper as traditional 80 pound coated stock of the period as well.

So, it is shown that the poster has been slightly altered from the original, is marked as a facsimile and certainly silk screened on stock cardboard stock of the 1970’s. Yet it is curious that if so many were produced how is it that hardly any of the 3,000 prints have been consistently offered at auction over the past 50 years or so. The one found by a collector was indeed a very low number with the word ‘facsimile’ mostly removed probably from the original owner ripping the poster off the wall from where it was pinned (a dorm room?) and later framed.

Another puzzlement is that an investigation into its provenance has also provided few clues. The curator’s office at the JFK Library had no record of such a poster in their archives and had no conclusion as to where it originated. We had the same response from several JFK collectors and dealers in political memorabilia.

For now, we have no conclusive idea where this facsimile poster originated and why it was even produced at all. Was the poster intended for a specific event, a fundraiser perhaps? Also, how many of the original 3,000 are still extant? We have questions we can’t answer. Can you?