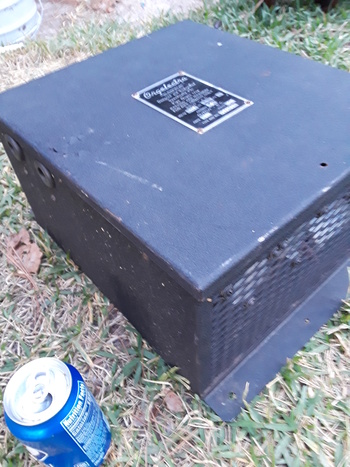 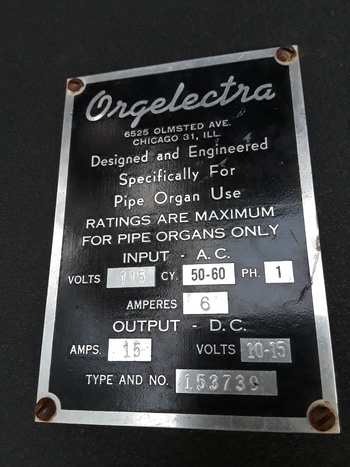 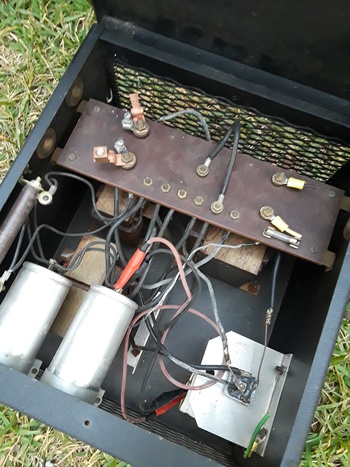 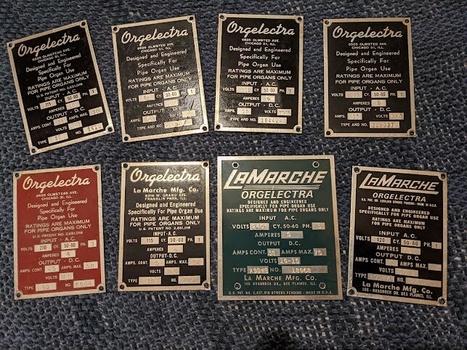 Not too many people have ever seen an ORGELECTRA I suppose, fewer still have probably understood what it *is*, so maybe it's worth sharing a little about these kinda 'disappearing' machines, in the spirit of oddball trivia if nothing else.

It is, simply, a low-voltage reasonably high-current DC power supply, intended to provide said 8-12 VDC power from a "line current" source to operate the various and sundry mechanisms within a pipe organ that make it work. Electrically speaking, its power output is very similar to the battery in a typical automobile (but for the 'portable' vs. 'permanent' aspect) and indeed 'wet cell batteries' were a valid option to one of these in the earliest days of commercial electricity. The technology here is likewise very simple (in terms of such things) for the most part, having literally existed since electricity existed. These units were "industry standard" for a total number of decades long enough to make *any* manufacturer of *anything* envious for the success of the product.

Pics 1-3 here are of an extant unit in my current collection. Pic 4 is (most of the remaining) evidence of too-many-to-remember other units that I myself have scrapped. Orgelectras have been manufactured for a hundred years or so probably, nowadays many hundreds can be found still working just as intended but the parameters have changed, so they're now not nearly as usable/suitable for the job as they once were. I think it would be wholly safe to say that most of the Orgelectras that now *don't* exist have not been supplanted because of failure to function -- that very RARELY happens to them -- and it is also likely many hundreds of now disused units still exist bolted to walls in church attics and basements, simply because nobody ever bothered to remove the (heavy!) old one when putting in something new instead. (and now nobody remembers what it is or was for, then somebody like me comes along, then . . . <sigh>)

Pic#1 is the unit in its black steel box with hinged lid and expanded metal top and bottom -- nearly all of them look mostly just like that. #2 is this one's nameplate, #3 has the lid opened to view the terminal strip and large transformer and components inside. This unit has (like many) been modified internally over its lifespan with some of its 'power rectification' components replaced with newer (relatively) parts than original, so some of the stuff in there actually looks a little different than it first did. It also WORKS a little better than it ever did -- the new parts work more efficiently than the old, so a modified machine's output *always* exceeds the original specs, which were always decidedly conservative anyway.

Pic 4 shows my Orgelectra *nameplate* collection, for the most part. (I'm sure there's a few more hanging around too.) I usually keep the nameplates, at least...also some of their terminal blocks (nicely made of brass hardware on thick phenolic material, screened with the name and connection info) and several of the (heavy gauge, and well made with black crinkle-finish paint) metal boxes. They're shown mostly in serial number order from 6410 - 205037 in the top row, the red one was a 3-phase unit and the others in the bottom row represent a company name/address change/merge with "LaMarche Mfg. Co." late in production, I believe LaMarche remains an ongoing concern whether or not they still manufacture pipe organ power supplies.

One accidental thing I have discovered about Orgelectras -- it turns out that even nowadays when they aren't the best choice for their intended purpose -- they DO continue to do an excellent job at running things like, for instance backyard collections of railroad signal lights and equipment -- *those* parameters haven't changed all that much either over the past hundred years...??? <LOLOL>