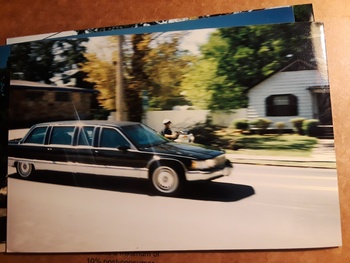 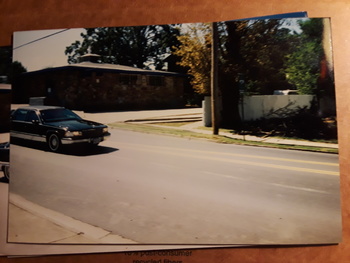 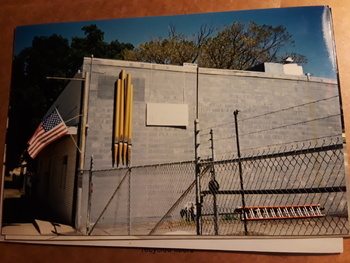 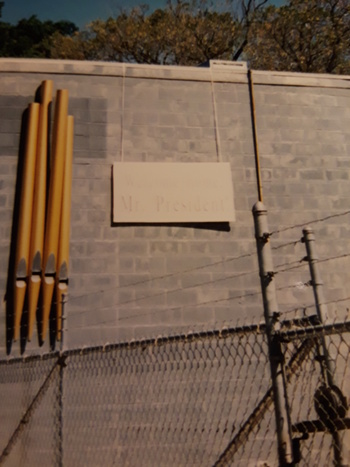 William Jefferson Clinton, love him or loathe him, was nonetheless President of the United States from 1993-2001. Little Rock, my fair city, remains one of his official "homes" (the 'birthplace' one is Hope, the 'boyhood' one is Hot Springs) and he visited here reasonably often during his Presidency, for all sorts of occasions.

I came across these three photographs today, totally accidentally through an entirely unrelated series of events, jogging memories of one of those visits. I don't honestly remember what specific thing brought him to town that day or even which day (year) it was, just that it so happens the motorcade route (which was published locally) passed immediately in front of the pipe organ shop where I worked -- *that* only happened the one single time. I do not believe I was the actual photographer.

Shown here in reverse order, photo #1 is the Presidential Limousine passing our driveway -- Bill is in there behind those totally tinted windows somewhere. Note the motorcycle cop speeding by. (the old stone building on the left in the background remains extant, the little house in the background right has now been replaced) An accidental other note -- the green sign next to the telephone pole isn't there any more either -- it now lives on my bedroom wall here, instead. ;-) ;-) :-) Photo #2 shows the same thing(s), as the limo approaches.

Photo #3 shows our US Flag flying that morning, the view of our building the President would have had when passing. Of note here is the white sign suspended on the side of our building. Pic 4 here is a closeup of the photo attempting to show that sign better, which reads "Welcome Home, Mr. President". It was *my* idea to do that, and our office manager helped me by printing it off full-size using the office plotter -- so all I had to do was tape it to a piece of paneling and strings then climb up on the roof to hang it?!! (the ladder is still laying there, too...) The part of this picture which startled me to see again here is that one of our gold organ pipes on the wall was not hanging properly that day, I hope somebody fixed that in time, too??

That day would likely be "the closest I've ever got to a U.S. President" I suppose, when all of us there that morning were standing out in the parking lot waving...?? <lol>