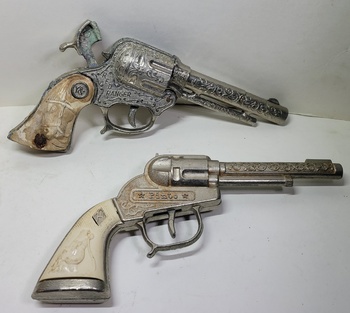 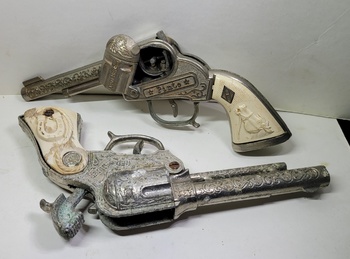 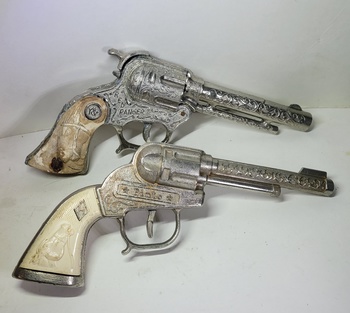 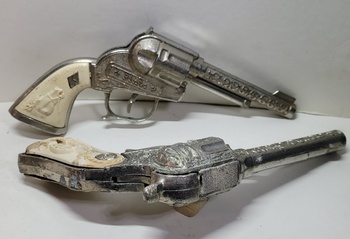 Picked these 2 cap guns up today. They are in very bad shape. One is missing the hammer and the other is a break open model, that was stuck in the open position, and also missing the top plate.

Both these guns are very fancy models. Look at those fancy grip panels. Usually you just see a flat panel

They are barely even parts guns. But they were cheap and I worked a little magic to make them decent to display. I used a long skinny zip tie to hold the break open Halco shut. Then I made a cork filler for the top plate. Both guns were lightly polished on one side(that would be shown) to enhance the faux engravings. See 2 before and 2 after pictures.

HALCO, HALPERN?
"Halco (the J. Halpern Company of Pittsburg, Pennsylvania) was known for their quality. They were a high volume distributor that sold millions of Cap Guns that were produced by other companies. They sold to a lot of the major retail outlets. In many cases the manufacturing companies even put the HALCO name on the guns they produced for Halco."

Julius Halpern immigrated to the United States from Austria in 1907 and in 1909 ended up in Pittsburgh. He was a banker and started a toy and costume company in 1946.

ALL METAL PRODUCTS
"From 1921 to 1957, the All Metal Products Co., better known as Wyandotte Toys, turned out mil-lions of toys that sold around the world."

"The fledgling company manufactured popguns, water guns and spring-loaded pistols. By the end of that decade, they claimed to be the largest maker of toy guns in the world."

ITS A DAISY
They started making spring-air BB guns, and won a contract with Sears. Their design wasn't very good, and customers complained. They were in danger of loosing their contract, but amazingly Daisy bought the rights to the whole line to eliminate competition.

"The factory turned out rifle clips and flare guns when steel was needed for the military during World War II." And during that time, they stayed in the toy business by producing wood and paper toys during a period when metal was precious. 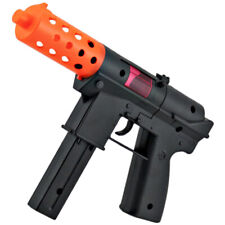 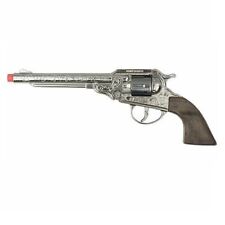