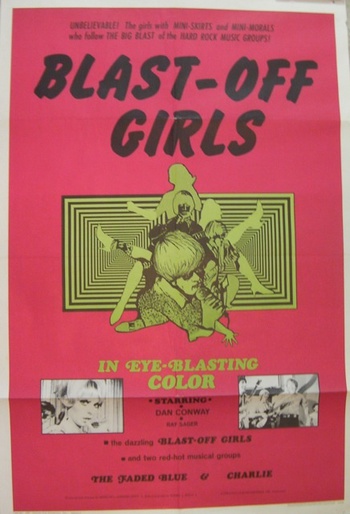 "UNBELIEVABLE! The girls with MINI-SKIRTS and MINI-MORALS who follow THE BIG BLAST of HARD ROCK MUSIC GROUPS!"

This is an original 1967 one-sheet for gore-meister Herschell Gordon Lewis' "Blast-off Girls." The film was a slight departure for Lewis as it focused on the perils of rock stardom rather than horror. As I recall, the garage-psych music in the film is not very remarkable (apologies to Jaded Blue and Charlie fans if there are any out there), but it does include a cameo by Colonel Sanders, who never fails to light up the screen.