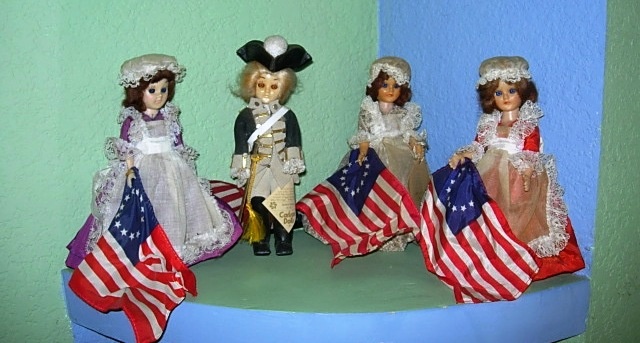 These are my Carlson Dolls Betsy Ross dolls, complete with flags and hang tags. They are three of the four dress versions: solid purple, yellow calico and solid red dress. I am only missing the solid blue dress. Yellow calico still has it's Disney price tag.
Poor ole George seems a little dazed by so many clones! He is wearing his military uniform. There is another formal black suit, which will join us eventually...

Carlson Dolls are plastic dolls dressed in a variety of costumes, primarily relating to American history, including numerous Native American Tribal attire and American Period dress, including specific historical figures. There are are also dolls in various international attires and female dolls for the different months.Carlson also produced small leather tipis.
Carlson Dolls was started in 1946 by Ray and Ann Carlson in Maple Lake Minnesota. The plastic dolls did not appear until the early 1950s. Prior to that, the company produced skookum dolls. These are the dolls which have a plaster head and a painted wooden body, with a blanket wrapped around it to make it appear the doll had folded arms. These dolls had several different faces from young to old; the ladies had a little baby on the back (just the head). If you see one with a pair of twins, Carlson the only company to produce that. These early dolls were sold by the Arrowhead Company.

The company also produced Minnetonkaa Moccasins for Arrowhead, as well as a line of animal salt and pepper shakers. In the early 1960s they also made stuffed animals and then ski boots. These other lines fell off due to Japanese imports, and by the late 1960s, the company was strictly dolls.

At the height of their production Carlson Dolls produced some 500 different dolls, and had 100 employees in their three factory locations (two in Maple Lake, Minnesota and another in Milan Minnesota), the factory in Milan being used primarily to produce the Eskimo dolls. After the death of Ray Carlson, their son Lowell took over the company, with David being in charge of West coast sales. In 1997, production was closed down when they could no longer compete with cheaper Chinese copies.

Carlson dolls were primarily sold at tourist locations in the United States, such as National Parks and sites of historic interest, and gift shops associated with these locations.