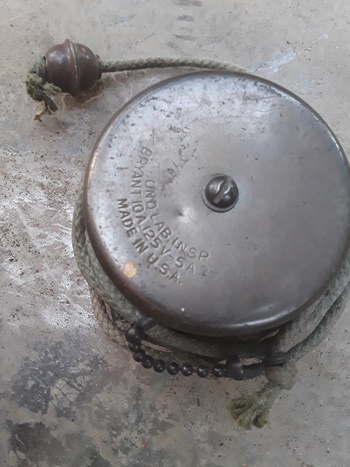 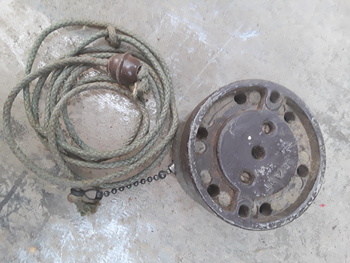 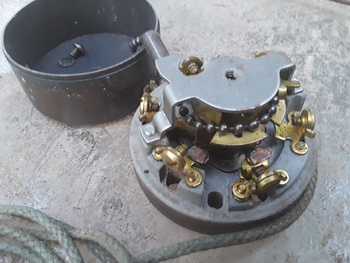 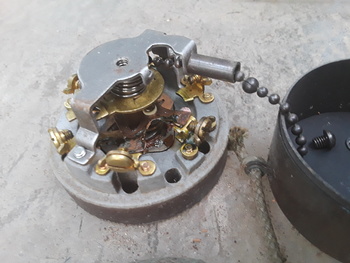 Made by BRYANT, I'm pretty certain anyway that this old pullcord switch was made to control a ceiling fan (or string of 'em) somewhere thereabouts the 1920's-40's, before (relatively huge and heavy by today's standards...I have a few of those too) ceiling fans went *far* out of fashion (as airconditioning was being born) then resurged in the 1970's or so. It would have been surface mounted to a ceiling someplace where its original (appearing) pull string with bakelite knob would have dangled down.

It is marked BRYANT on its metal cover and underneath its brown ceramic base. Pics 3 & 4 are meant to show the truly ingenious mechanism inside which is a ratcheting sorta thing that goes one 'click' further around each time the chain is pulled, for a total of 4 (I think, at the glance) combinations of electrical connections to be made between its various little brass contact parts (both on the moving axle, and the stationary ones with screw terminals all around) that, in turn, would be the typical "HIGH/MED/LOW/OFF" settings expected from a ceiling fan.

And though I haven't (yet?) found reason to use it again, I have little to no doubt that it works as perfectly correctly *right now* as it did the day it left the BRYANT factory, and is ready for another hundred year's worth of duty...?? ;-) :-) :-)