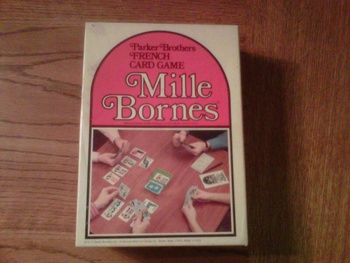 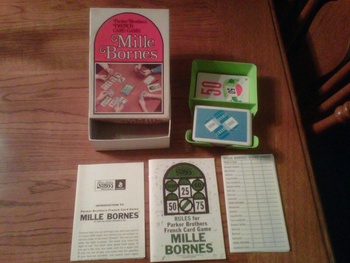 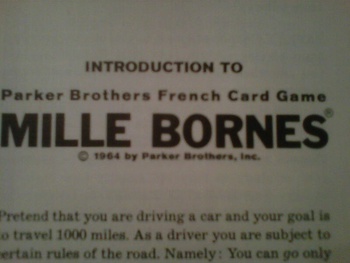 This is my 1964 Mille Bornes game. Made by Parker Brothers. My Mom always talked about playing this game as a kid & I was always interested in how it worked because I love cars and games. My Dad found this for me and bought it and gave it to me for Christmas last year. The Box, instructions, cards, card holder and score sheets are all in great shape ! We have played it alot and it is fun. Here is some history I dug up on it from Wikipedia explaining it.....Mille Bornes (French for a thousand milestones, referring to the stone distance markers on many French roads) is a French card game. In the United States, Mille Bornes is manufactured and distributed by Winning Moves Games now under license from Hasbro. It was previously produced by Parker Brothers. The game was created in 1954 by Frenchman Edmond Dujardin, A key innovation was the addition of the coup-fourré, whereby bonus points are earned by holding back a safety card (such as the puncture-proof tire) until an opponent plays the corresponding hazard card (in this case, the flat tire). The premise of Mille Bornes is that the players are in a road race. Each race—or hand—is usually 700 miles (or kilometers) long, but the first player to complete that distance exactly has the option to declare an extension in which case the race becomes 1,000 miles. Mille Bornes is played with a special deck of cards. There are hazard, remedy, safety, and distance cards. Each hazard is corrected by a corresponding remedy, and is actually prevented from happening in the first place by a corresponding safety. The target distance is reached by playing distance cards.