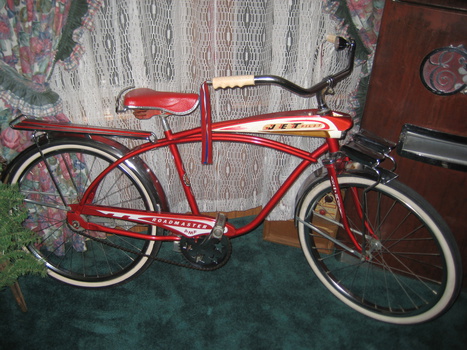 This is my 1961 AMF Roadmaster "Jet Pilot" ! The reason I say 1961 is because we found an advertisement for Christmas 1961 advertising this bike in it along with Santa Clause and also some Tr-Cycles that year. It is in almost like new shape. One of my dads friends that collects bikes essentially gave this to me. It was missing the 2 front headlights on the front truss bar and he had ordered NOS parts to go on it and I really liked this bike so much that he sold it to me for the amount of "cash" I had in my pocket right then.....$28. I couldn't believe it !! Notice the front chainring, it has Stars in it, and also the Dual front headlights, and the built in Horn in the tank. This bike rides like a dream and I have won 1st place in Original class at 2 shows so far with it !