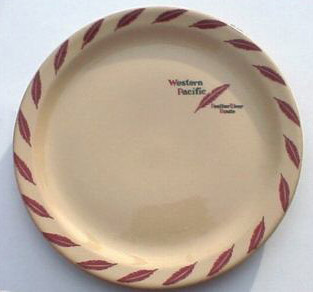 This plate is part of the Western Pacific "Feather River Route" Pattern that I've always liked for its simplicity. Western Pacific was an also-ran railroad company set up to compete with the mighty Southern Pacific by connecting the Denver and Rio Grande (which financed WP) to the Pacific Ocean. Known for its "California Zephyr," the company eventually suffered due to inferior routes (SP route through the Sierra Mountains was better) and poor management, and was swallowed up by Union Pacific.

My personal connection to WP is that I found out recently that a WP freight tunnel had run underneath the hill I live on in San Francisco, but was closed and barricaded up after a fire in the 1960s. You can still see where the track ran from cracks in the street.