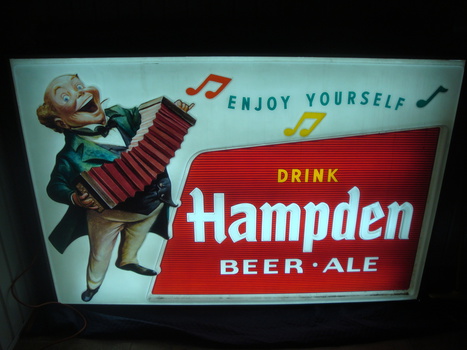 Hampden Beer Plastic Embossed front. 6'x4'x1'thick."Johnny Hampden" playing his accordian. I believe it was an outside sign which at one time advertised Hampden Beer and Ale. A big seller in Mass. during the 30's 40's 50's and 60's until Piels bought the Brewery located in Chicopee. Sign was made in Lima, Ohio but for an unknown reason never made it to Mass. One little road trip brought it back here to Western Mass where it now proudly sits on my porch to complement my other Hampden Beer pieces.