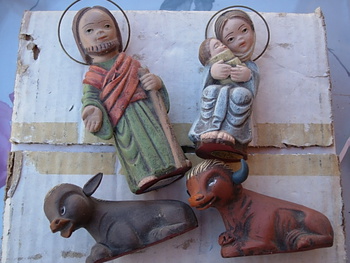 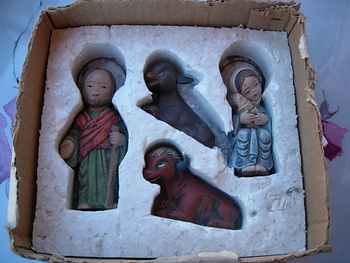 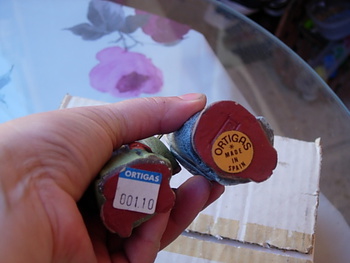 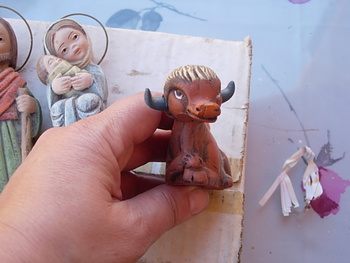 Manuel Ortigas Méndez was an important member of the group of Nativity figure producers who set up shop in Murcia in the early 20th century. He opened his workshop in 1933, although he was not a figurista himself, but was responsible for the sales and business aspect of the company. His lead figurista was Pedro Hernández, and in addition to nativity figures, the company made cardboard toys and also produced terracotta statues of saints and secular decorative statues. Murcia was well known for its clays, and at the time, truckloads of clay from local claypits could be purchased very cheaply, and the workshop did very well for several years.

In 1940, he tried to set up a workshop in Madrid, but the effort was not successful; however, while he resumed the business in Murcia, he himself remained in Madrid and lived there for most of his life.

Initially, Ortigas’s painters painted the figures with egg tempera, mixed in the eggshell, which gave a very satiny texture although it tended to flake off over time. Figures made by Ortigas at that time were not “lienzadas,” that is, covered with real cloth, as are those produced by some other Murcia workshops.

The workshops did well and in 1971, Ortigas installed a huge nativity of some 500 figures in the Santa Isabel Garden in Murcia that brought him considerable fame. Ortigas sold his figures not only in Spain, but in Latin America, and finally even set up a workshop in Peru, although little is known about its fate. Murcian artists went to Peru to work in the shop, but most returned within a few years.

He and Jose Fernández, his business manager, went their separate ways in the 1970s, with Fernández wishing to establish his own workshop. Ortigas gave Fernández a complete set of molds for his new workshop.

By the late 1970s, Ortigas’ own company was experiencing serious financial problems, possibly because at that point Manuel Ortigas was in his 80s and no longer able to monitor his business as before. The employees made a desperate attempt to get loans and financing to continue the business, but they were not successful, and the workshop closed for good in 1979. The stock and equipment were sold off to pay the employees their long overdue wages.

Nativity Scenes and Figures
See all