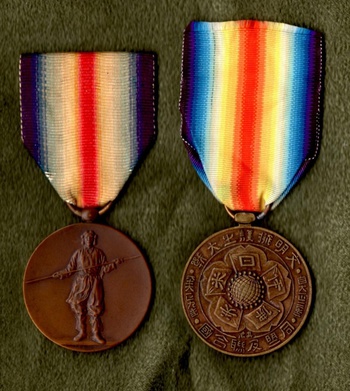 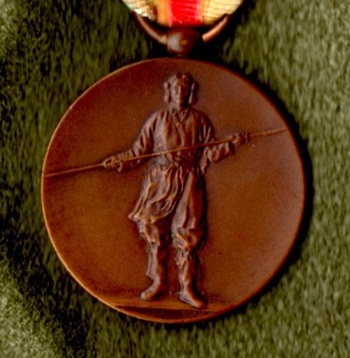 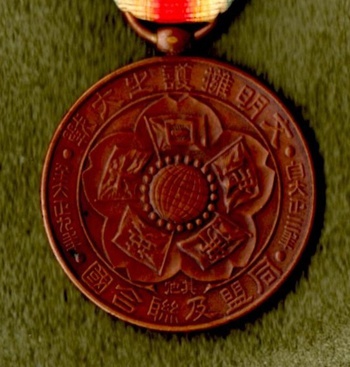 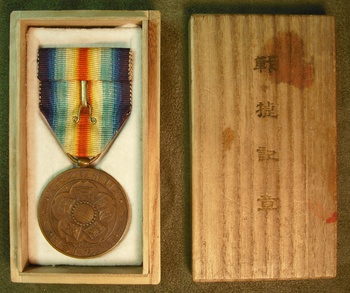 At the start of the war, Japan used it’s treaty with Great Britain as justification to demand that Germany withdrawal of its ships from neighboring waters and the surrender its colonial lease of Kiachow, China. When Germany failed to comply, Japan laid siege to Kiachow, captured the fortress at Tsingtao, and occupied several other German colonial possessions in Asia. After the war, as part of the Treaty of Versailles, Japan received a mandate over Germany’s Asian possessions north of the Equator, specifically the Palau, Marshall, Caroline and Marianas Island groups.

Approximately 400,000 Japanese Victory Medals were issued. The medal was designed by Masakichi Hata, who held a professorship at the Tokyo School of Fine Arts. Since the European Winged Victory figure had no cultural significance to the Japanese, Hata chose to depict Takemikazuchi-no-Kami, a warrior deity in the Shinto tradition. The reverse shows, within the outline of a cherry blossom, a globe with flags marked Japan, US, Britain, Italy and France, with characters below for "and the other allied and united nations". Around the edge there are the characters for "Great War for Protection of Civilization, Taisho 3rd year to Taisho 9th year".

Again, the medal to the left in the first photo and in the second and third photos is the official issue. It differs from the reproduction on the right in that the repro is a bit bigger than the 36mm official medal. Also, the flags on the official version are sculpted to look like they are flying in the wind, and the flags in the reproduction look almost flat. On official Japanese ribbons, the green lines (between the blue and white) are very pale – and didn’t even come out in my digital photos. The yellow is also much paler than European ribbons as well. The fourth photo shows the original velveteen lined wooden box for the medal. The characters on the lid mean “Victory in the Great War.” I’ve put the medal in face down so you can see the Japanese regulation hook and eye for attaching the medal to a ribbon bar.

* * * * * * * * * *
Postscript:
After WWI, Japan incorporated the former German possessions as part of its empire with aggressive economic and immigration programs. Japanese, Okinawan and Korean immigrants eventually came to outnumber native peoples by as many as two to one on some islands. Then, during the 1930s, the Japanese Navy began construction of airfields, fortifications, ports, and other military projects on the islands as a strategic defense against any attack on the Japanese home islands. Thus, they also became important staging grounds for Japanese offensives in WWII. Kwajalein was a major base supporting the attack on Pearl Harbor and the Battle of Wake Island. Palau supported the Battle of the Philippines. Saipan supported the Battle of Guam. Truk became the base for amphibious landings on Tarawa, in the Gilberts, and New Guinea.