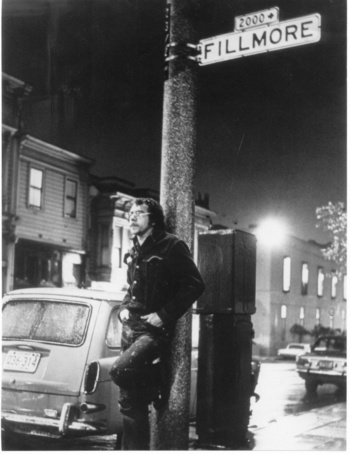 This photograph was shot by David Keller when he had a studio on Fillmore Street San Francisco in the early 1970s.

It is the quintessential San Francisco photograph of a young man paused at a street lamp on a foggy night. The young man is looking both inwardly and outwardly. He contemplates what has passed and what might lie before him.

A scribble of words accompanies it, a poem, as it were: "tonight the gauze fog floats across our city/ I become fog in the stratosphere of poems/ I become a poem and speak your name/ San Francisco."