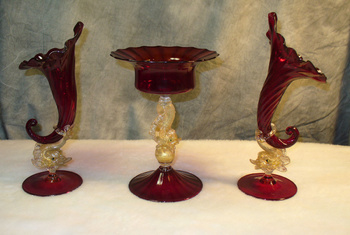 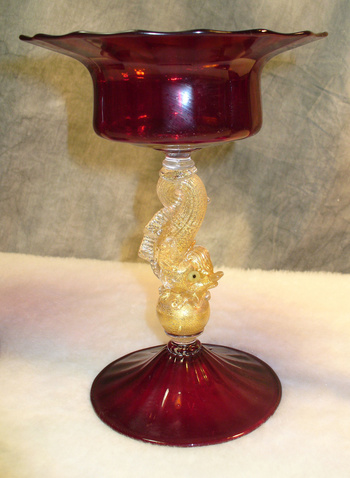 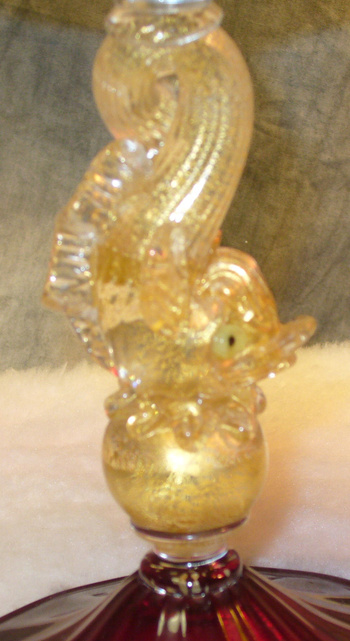 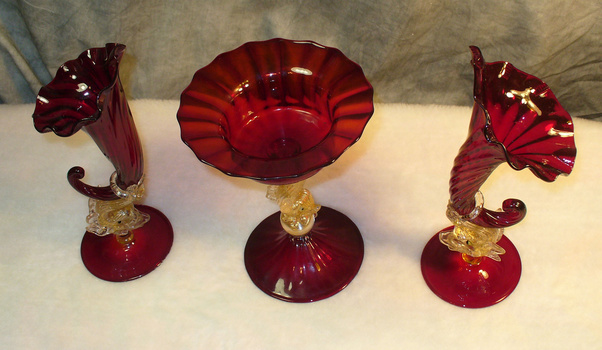 This is a combo set. Old and new. My first trip abroad in the ninties was to Venice because I loved the glass. I was able to go cheaply. Total trip less than a grand for 10 days including food and gifts. God, wish fares and hotels were that cheap now...lol. See, I had bought the two cornucopia vases and was curious who made them and when. That was the reason for the trip. The cornucopia shape is pretty rare and often has grapes as the base and not dolphins. I found the factory which made it and was immediately led by the manager to a back private museum room. He explained to me that they were made about 1700 in the ruby color and the design dates back to earlier and he shows me a nearly identical piece in white with a blue edge which was one of the first that his factory had made back in that 1700 time frame. I was surprised to learn how early the dolphin design was made. I have seen tons of compotes, glasses, sherberts etc. in the dolphin design. So he explains that the ruby color in simple pulled rib (as opposed to quilted) was made for a short period between 1650 and 1750. He then proceeds to try and sell me the cornucopia white vase at $3000 and then many other pieces in this unbelievable, not open to the public room. I scrambled fast to figure a way out at this point because he thinks I am some grossly well heeled individual. After all, I have a pair of old cornucopia vases don't I. He sends in reinforcements. The girl who most resembles Sophia Loren but only 22. Gorgeous with an accent which could make any man salivate and a body and personality to match. Now I was nervous on many levels. I did my best and finally was able to leave. Finally, back in the small public shop praising Jesus I was let go without maxing out a credit card. I was also unsure wheteher or not young Sophia didn't have sex with me without ever touching me. Just as I am nearly recovered, Miss Sophia comes into the public store. She whispers to one of the clerks and then Sophia disappears back into the private locked area again. The clerk a plump fiftyish woman with a most friendly face and demeaner motions me to a cabinet. She says for me to stay. She bends down and opens the bottom of the cabinet and pulls out the centerpiece in the photos. She says the made the centerpiece in the forties or fifties. The only difference is that the dolphin is atop a ball. She says she was told to sell it to me for $30 by the manager. I was thrilled and prize the piece as the originals. I also cherish memories of the whole experience.