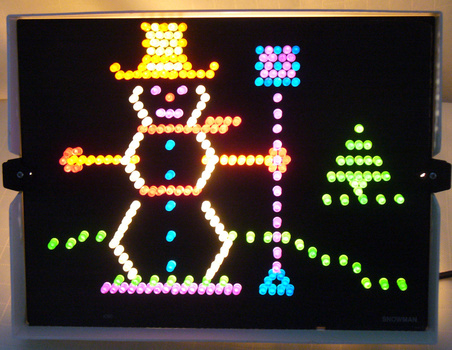 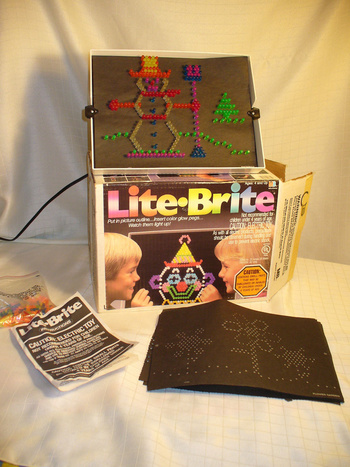 Ok, after seeing Rudolph yesterday I couldn't help but adding a retro theme xmas pic. Here is a lite brite from Hasbro done in the classic snowman. This is the 1989 Lite brite. Virtually unchanged since being introduced in 1967. However, intense marketing began after 67 xmas in January 1968 along with nationwide distribution. How do I know. Well, I was the first to get a lite brite. I coveted one at the age of seven. I got the deluxe version. It had a back screen which flipped the blackout of the design up one peg so that a two part animation could be done by pressing a lever at the bottom of the Lite Brite box. So I got one for my birthday which is mid-February after talking as much about it as Ralphie did about his Red Ryder BB Gun for xmas. The commercials ran heavy in January. I couldn't shut up about wanting a Lite Brite and my mom was worried because stores had yet to recieve them by February in our area of Pennsylvania. Well, two days before my birthday they finally arrived. Mom was so relieved just to get me to shut up. I had a wonderful birthday that year....lol.