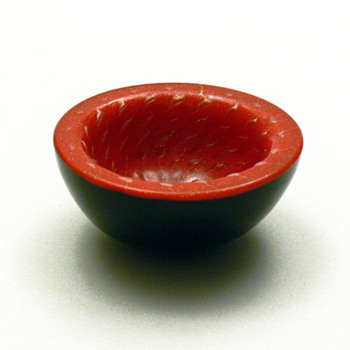 This is the very first glass item I ever got and is a really lovely one, with its black and red colour, the golden dust inclussions and the irregularly shaped bubbles.

I want to thank Dean at MuranoArtGlass for helping me identifying this bowl. Now i know it was made by Barbini in the 1950s.

As found on the internet: "Alfredo Barbini began learning the art of glass making in 1912, aged ten, at Abate Zanetti, the design school attached to the Murano Glass museum. He then went on to work for Ferro Toso, Cristalleria Murano, Zecchin-Martinuzzi, Seguso Vetri'dArte and Vetri Artistici Muranesi Societa Anonima. In 1946 he became a partner at Cenedese, and then began Barbini Glassworks in 1950. Barbini has become renowned for his heavy, thick sculptural forms which have won him many awards. In 1952 Alfredo's daugher Oceania Barbini-Moretti joined the glassworks and is now the company's sales manager. His son Flavio became a designer for the firm in 1968."

Will it be a design by Oceania Barbini-Moretti?