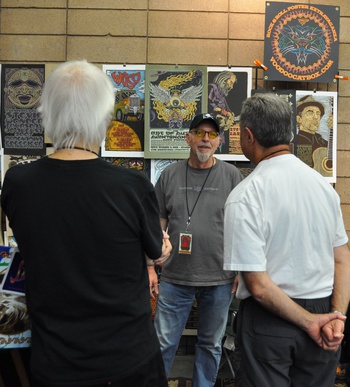 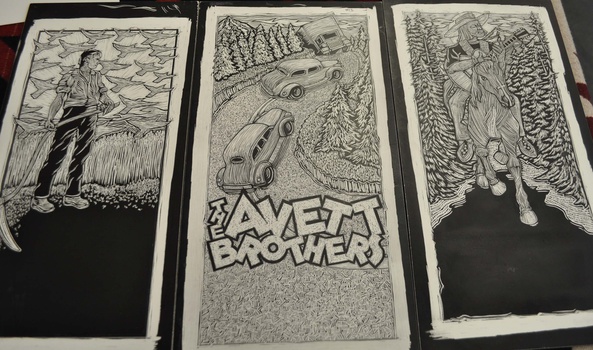 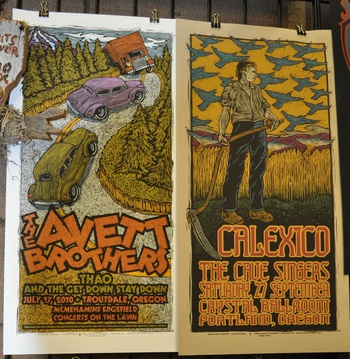 Gary Houston (he's in the left photo, at center) has always been one of my favorite rock-poster artists. His buffalo-stamp poster for a series of shows by Phil Lesh & Friends is a classic, as are the fish-related images he's conjured over the years for Hot Tuna.

The unique look of Houston's work is a product of both his vision as an artist and his chosen technique. Like many of his peers, Houston's posters are screen prints, but unlike his colleagues, who usually leave the printing to accomplished artisans, Houston prints all his posters himself, one by one.

He also creates the base for his images on a scratch board rather than by applying pen to paper or mouse to computer screen. In the center photo you can see a few of the boards he brought with him to The Rock Poster Society's Festival of Rock Posters, which was held at the Hall of Flowers in Golden Gate Park on 10/9/10. The boards are smaller than his posters, so when his scratched images are enlarged they get a little bit scratchier (see far-right photo), which suits his hand-crafted aesthetic just fine.

Some of the imagery in Houston's posters are inspired by the art of the Pacific Northwest's indigenous peoples, others are portraits, and still more are riffs on other posters. For example, his poster for a Massive Attack show in May of 2010 is based on a famous World War I poster of fixed bayonets.