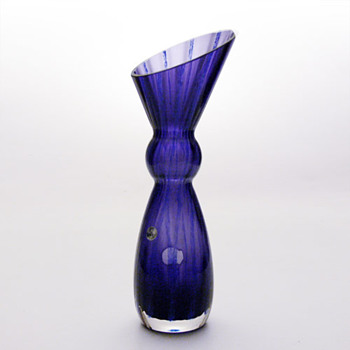 Nanny Still worked mostly for Riihimäki lasi Oy, but as she didn't live in Finland but Belgium, she also worked for companies in Belgium -Cerabell and Val St. Lambert-, the Netherlands -Raak-, and Germany -Rosenthal- After Riihimäki discontinued blowing glass in 1976 she designed glasss items for Rosenthal, mostly table service but also vases, candleholders, and other stuff. This vase belongs to the SAMOA range, designed in 1993. It consists of three vases and they were made in two color models: this purple and blue and another red and yellow in almost opaque glass.

March 2019
In the last years I have found out that there were more color combinations in this series: light blue with green strips, terracotta with slightly darker strips, yellow with terracota strips, even a dark magenta with pale pink strips... and there is also an unlisted design! I wish iI could find and get it sometime :)