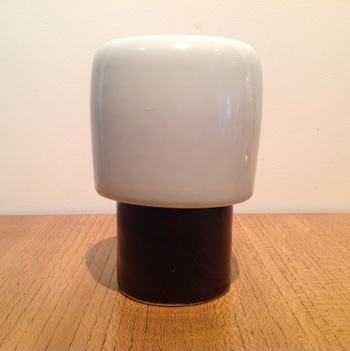 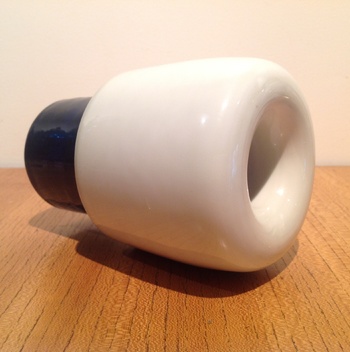 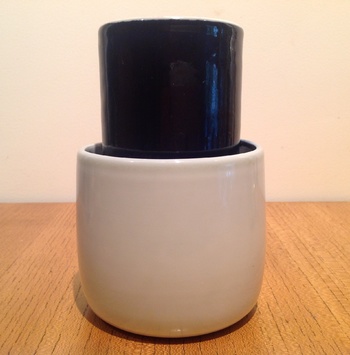 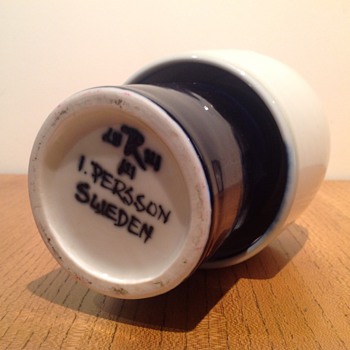 This was an ebay purchase a few years back.
I liked the "POP" look of the vase/votive .... it reminded me of Mary Quant dresses, Marimekko. When it arrived I realized it was a lot more involved than at first glance. How on earth did that lip fold over so far (and so elegantly) down the body of the vase? I had thought it was black and white, but in fact that is a very dark blue. The rim everts almost like a mushroom in on itself. It looked like the sleeve of a Mary Quant frock!

At that time I only knew it was from Rörstrand. I did not know anything about the designer was at that time. I knew of other Rörstrand artists: Carl Harry Stalhane was a favourite and the others ..... Hertha Bengston, Gunnar Nylund, Marianne Westman and Bertil Vallien. Rörstrand has attracted some of the most talented artists & designers of the day. But Inger Persson was an unknown.

I wonder if this vase/votive is part of the 'Pop' series?

"It was in 1959 when the designer Inger Persson arrived at Rörstrand. She was discovered by Fredrik Wehtje at Konstfack (the Swedish applied and fine arts university) and designed everyday use objects as well as artware. Her teapot Pop, in shiny happy colours, was a great success. Inger Persson was one of a number of artists who were let go in the early 1970s, but she was later offered a position at Rörstrand yet again. Her second stint at the factory was 1981-1996. Following some meagre years in the 1970s, the company is now hiring artists again. Inger Persson comes back to work at Rörstrand and is joined by among others Kerstin Hörnlund, Gösta Grähs and Suzanne Öhlén."
rorstrand-museum.se/en/history/

I now also have another vase/votive in a chamotte.