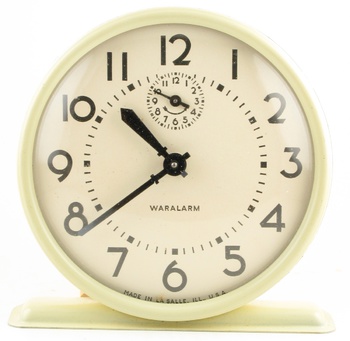 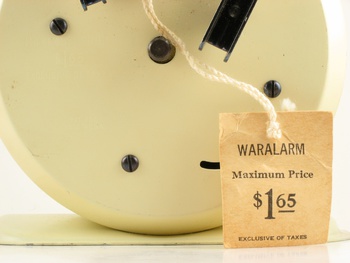 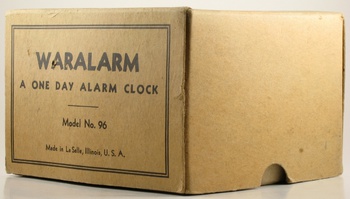 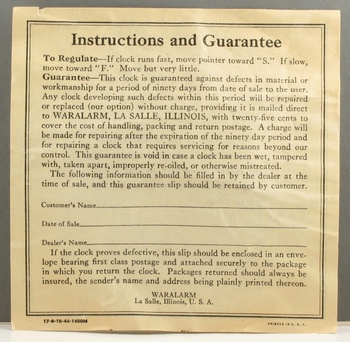 The "Waralarm" clock was made to conserve brass during World War II. The first ones were made in a cardboard case, and later ones were metal. This example has its original box, and price tag of $1.65.

"WESTCLOX is now making plans to produce a Waralarm, a conservation model alarm clock, the production of which was requested a short time ago by the War Production Board.

Despite the difficulties, we believe the clock is pleasing in appearance,
and will be readily acceptable by the buying public.

It has a case of moulded wood fibre, which will be lacquered. It stands 5 5/8 inches high, and is 5 1/4 inches wide, with a large, easy to read dial.
It has a bell alarm, but plans call for the eventual use of a buzzer.

The Waralarm and other inexpensive Westclox clocks use the "model 66"
movement. Max Schlenker's patent, applied for on Sept. 4, 1943 and issued on Oct. 17, 1944, #2,360,589 describes a cheaper version of the model 66 movement, in which the alarm hammer strikes an extension of the trip spring, making a bell not necessary (referred to above and below as the "buzzer" alarm).

The Bingo that was introduced in 1936* appears to be the same case used for the metal case Waralarm, except for the difference in alarm shut-off. The Bingo was out of production during the war (along with other non-war production) starting July 31, 1942. The Waralarm was introduced around April 1943. It was first made in a molded wood fibre case, then the metal case. The Waralarm was discontinued in May 1944*. The "Raven" in the same (metal) case was introduced Sept. 21, 1944*+, and discontinued in January 1947*. The Bingo was re-introduced Sept. 25, 1947*.

+Sept. 21, 1944 is the first date listed for the Raven, but it is possible
it was introduced earlier. The price change book gives dates that prices
were established or changed, and gives discontinuation dates.