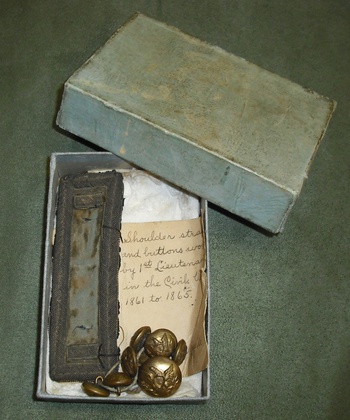 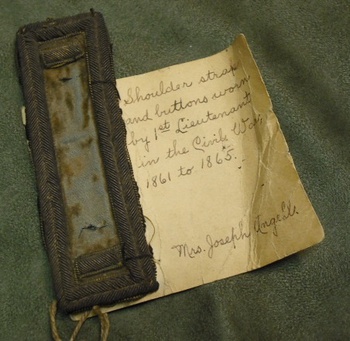 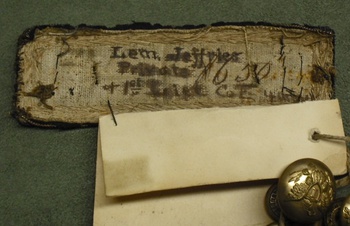 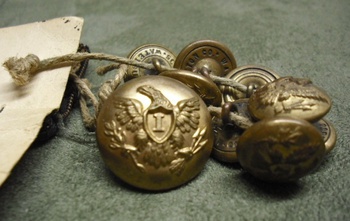 Here is a wonderful grouping, preserved for us long ago by Mrs. Joseph Angell, who helpfully left us a note written in what looks to be fountain pen: “Shoulder strap and buttons worn by 1st Lieutenant in the Civil War, 1861 to 1865.” The note is stitched with thread to the strap, and the buttons are strung together with string laced through a hole in the note. The whole thing was tucked with tissue paper into a small cardboard box. Clearly she didn’t want the items to get separated, and I have kept them as she saved them.

The lieutenant was in the infantry, as evidenced by the blue silk background of his shoulder strap, and the “I” in the shields of the eight small and one large button. The back of the strap is marked “Lem. Jeffries Private & 1st Liet Co F 4th (illegible).” I bought this item some time prior to 1993, before I owned a computer and probably before researching names on the internet became so easy. I hadn’t thought about the name on the back of the strap until a few months ago. What a surprise!

Lemuel Jeffries was the son of a prominent lawyer and author in Wooster Ohio, and was one of the first young men of his town to volunteer after Ft Sumter was fired on. He rose from private to 1st lieutenant in the 4th Regiment, Ohio Infantry. He would later serve as a Captain in the Veteran Reserve Corps, which was a corps of personnel who were wounded or otherwise disabled but could still perform light duty, freeing able-bodied soldiers to serve on the battlefield. After the war he returned to Wooster and became a newspaper publisher and editor of the Wayne County Democrat. He was a key figure in the Wayne County Democratic Party, serving as the mayor of Wooster Ohio for five successive terms. He published his Civil War diary under the title "The Excitement Had Begun!" Lemuel passed away in 1909.

“Mrs. Joseph Angell” was Helen Jeffries Angell, Lemuel’s daughter, born in Wooster in 1868. She’s listed in the 1914 edition of Women’s Who’s Who of America. She had high academic honors, receiving her Ph. D. in 1893. She was active in the Missionary Society and Associated Charities. She passed away in 1956, and is buried at El Carmelo Cemetery, Pacific Grove, California - about 18 miles from the small shop where I bought this item.

I’ve mentioned before that I have nobody to pass my collection on to, so intend to dissolve it when I reach a certain age. When I do, I plan on gifting this piece to the Wayne County Ohio Historical Society. In the meantime, I’m looking for a copy of “The Excitement had begun!”