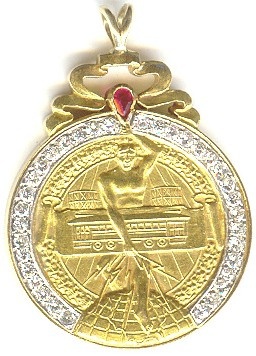 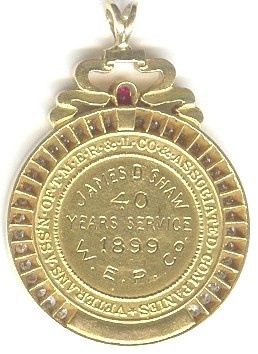 This 30.8mm wide and 44mm tall, 14k gold medal weighs 27.7 grams and is inset with 34 small diamonds and one large ruby. Unfortunately the medal is also unsigned so who ever made and designed it remains a mystery.

At the top of the medal a partially uncoiled ribbon protects the protruding ruby torch while also forming a watch fob type loop. Added to the top of this fob loop is a “V” shaped double loop which makes it possible to wear this medal on a neck chain.

The obverse design portrays “Electricity” as an allegorical male figure stepping across the top of the world while holding a banner on which an old electric street car is depicted. His left hand holds a red (the ruby) torch above his head to light the way. Behind the banner are the twin gas storage tanks of the old Milwaukee coal gas manufacturing plant.

In the center is the five line inscription “JAMES D. SHAW // 40 // YEARS SERVICE // 1899 // W.E.P. CO.” In this case the “W.E. P. CO.” stands for the Wisconsin Electric Power Company and 1899 is the year that Shaw started representing The Milwaukee Electric Railway & Light Company as their attorney.
The fact that this medal was actually issued in 1939 and not 1899, is a good example of just how misleading dates on a medals can be.

So who was James D. Shaw?
James Deyo Shaw was born Feb. 7, 1879 in Jackson, Michigan. He graduated with an LL.B (Bachelor of Laws) degree from the University of Wisconsin in Madison on June 18, 1899 and went to work for the Milwaukee law firm of Spooner and Rosecrantz in the same year. The firm which specialized in utilities and tax law, assigned Shaw to represent their client TMER&L Co. which was then a young company formed just three years before. As the firm grew and evolved Shaw rose to full and senior partnership by the 1920’s when the firm was known as Shaw, Muskat & Paulson. By then Shaw was also the General Counsel and a director of the W.E.P. Co. and it’s subsidiaries: the Transport Company, the Wisconsin Gas & Light Co. and the Wisconsin-Michigan Power Company.

In 1947 Shaw died of a Cerebral Hemorrhage resulting from an automobile accident. By the time of his death he had amassed a sizeable fortune which left his wife Dorothy well provided for until her death in 1980.
His wife Dorothy was a remarkable woman in her own right. After her passing she left an endowment fund of 4.5 million dollars in trust with the Greater Milwaukee Foundation which specializes in charitable trust fund management. This fund resulted in the establishment of the Shaw Scientist Award which since 1982 has given in excess of 12 million dollars in unrestricted research grants to 54 “Shaw Scientists” doing work in the biological, medical and environmental fields.