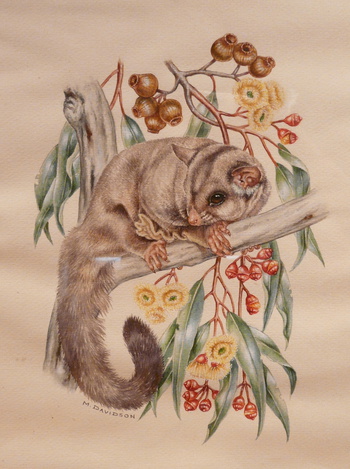 I bought this framed watercolour at Vinnies a year ago. In fact I bought eight of them at the same time. I like Australiana and these were impressive enough renderings of the subjects.

I had never heard of M.Davidson and at first could find little about him/her. I went searching at the main library in Sydney and found a book with illustrations with the same signature: Australian Weeds by Gai Stern.

I discovered that M.Davidson was in fact two people: Marion & Margaret Davidson. They were nicknamed Peggy and Mary. They were twins!

This one is of a sugar glider possum and pear fruited mallee (Eucalyptus, pyriformis).

Wikipedia notes: "The sugar glider (Petaurus breviceps) is a small gliding possum originating from the marsupial family. The sugar glider is native to eastern and northern mainland Australia (as well as being introduced to Tasmania, Australia) and is also native to New Guinea and the Bismarck Archipelago."

They were also avid photographers. Their special interest was on the boats going in and out of Sydney Harbour in the 1950's.
http://www.shf.org.au/DavidsonFiles/DavMaster.html

"The Davidson Collection carries the name of Alister Thomas Davidson ( 1889-1966), a long-term and senior officer of the famous Burns Philp Company.
Davidson's twin daughters Marion and Margaret took the actual photographs around Port Moresby, Brisbane, Sydney, Melbourne and at sea over a period of about 10-11 years, mainly during the 1950s.
The sisters took most of their photographs from Manly ferries, from the foreshore and from an 8m launch that they jointly owned."