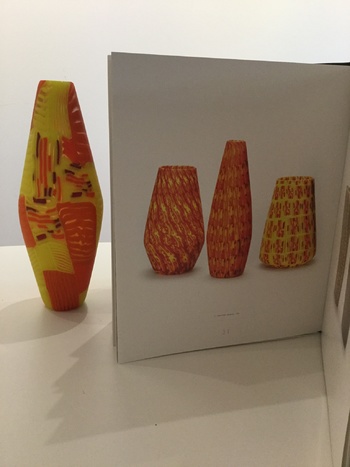 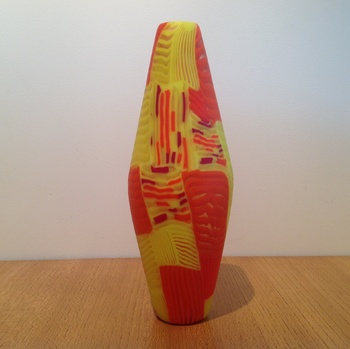 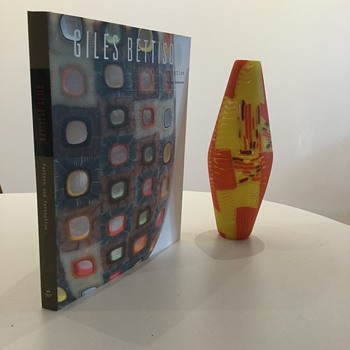 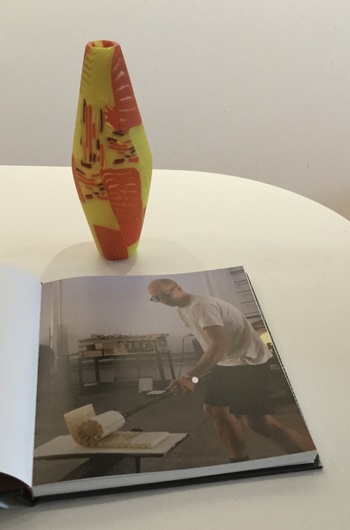 I bought this vase at a flea market in Sydney a few years ago. The colours attracted me to it. When I picked it up I realised that it had been ground all over to give a matt finish. I used my loupe and saw that it was signed.

Later on at home I read the signature of Giles Bettison and saw that it had the numbers 4 95 : I was to learn that the numbers meant April 1995. I had seen some exhibitions of Giles Bettison's work here in Sydney and knew that at that time he was working in New York to much acclaim.

Richard Marquis and Dante Marioni visited Australia in 1994 and had greatly impressed the young Giles Bettison. Bettison had been making his own 'murrine' while doing his studies in Canberra.

A similar vase is in the Powerhouse Museum here in Sydney marked 5 95. It and another had been bought by the Pilchuck Glass Company and were presented to the Museum in 1998; both vases were produced from the first 'Latitudes 1' workshop, Canberra School of Art in 1995.

The Powerhouse Museum notes: "Designed and made by Giles Bettison (b.1966). Following a visit to Australia by Marquis and Marioni in 1994, Bettison confirmed his commitment to glass and enrolled in the Canberra School of Art, graduating with First Class Honours in 1996. He started to experiment with making murrine vessels with canes from fused sheets of Bullseye glass, prompted by the opportunity of working as technical assistant for the 'Latitudes 1' workshops in 1995."

"Here, made possible by the compatible glass developed by Bullseye , glassblowers worked alongside kilnworkers to combine their processes. this time he was researching the work of early modernist artists like Piet Mondrian and Josef Albers, and he became interested in Anni Albers's drawings and textile designs . He saw connections between his interests and the traditions of textiles and tried to capture the vitality and energy of, for example, the patterns, textures and cultural value of textiles from Africa and Asia."