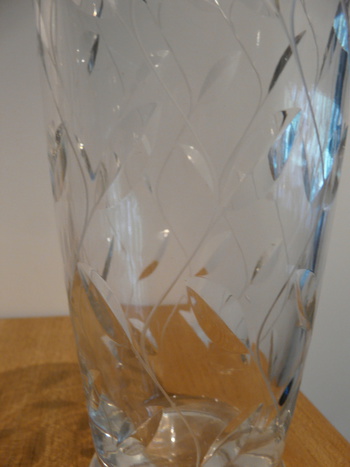 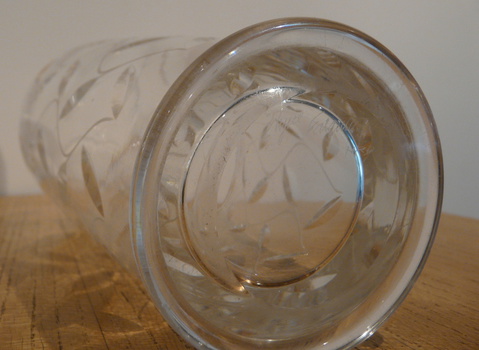 On my first trip overseas in 1979 I was in London to see the Thirties exhibition "British art and design before the war". I was especially interested in art deco at the time and my eyes were opened to others than Keith Murray and Clarice Cliff. I bought the catalogue and it became an early vehicle for honing my eye.
Thirty years later and I came across this vase in a thrift shop. I went home and went straight to page 188 and there it was!
W.Clyne Farquharson 'Leaf' 1939.

Vase, clear glass, footed trumpet shaped with cut and engraved decoration of leafy stems; height 20 cm. John Walsh Walsh, Birmingham.
(7 ¾" high, 4 ¼" across the top opening and 3" across the base.)

It has a diamond engraved signature in the ground pontil: Clyne Farquharson NRD. It is not dated. I've read that the NRD refers to "Nationally Registered Designer". There is also part of an etched stamp: "Walsh/England"
"Clyne Farquharson joined the design department of John Walsh Walsh Ltd in 1924 at the age of 18 from Birmingham School of Art. The first recorded date for pieces signed by Clyne Farquharson is 1936. He remained with the company until the closure of the factory in 1951 when he was also Sales Manager.
Very few glass pieces from the crystal houses of the West Midlands have featured the signature of their designer. An exception was Clyne Farquharson, who worked for John WaIsh Walsh of Birmingham. "

"Clyne Farquharson was born in Birmingham in 1906. His parents were from Scotland and he was the second of five children. He went to art school between 1920 and 1924 and on leaving, was appointed chief draughtsman at John Walsh Walsh, a very senior position for someone aged 18. He was christened William but adopted Clyne, the maiden name of his grandmother, to provide him with a distinctive name for his designs at Walsh Walsh.
Two pattern books from the 1920s held by Birmingham Art Gallery were the first evidence of Clyne Farquharson's work. He produced four principal designs: Leaf, Kendal, Barry and AIbany. Examples from these ranges are held at Broadfield House, all featuring deep cutting but also mechanical rather than acid polishing. Other designs from the books have not been seen elsewhere."
www.sgtnews.sgthome.co.uk/pages/1993/SGTN93_19-20.pdf