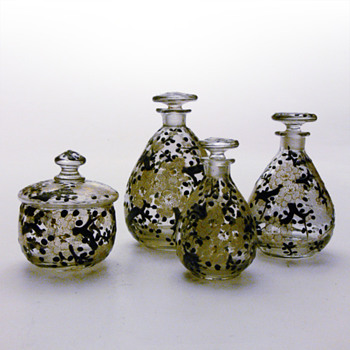 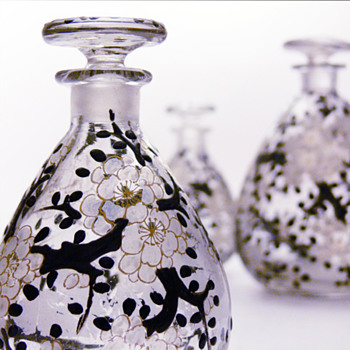 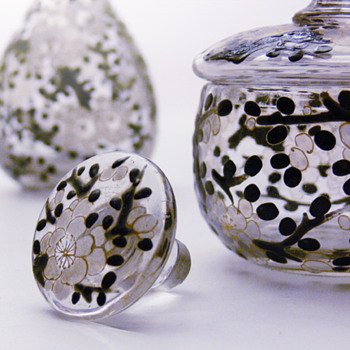 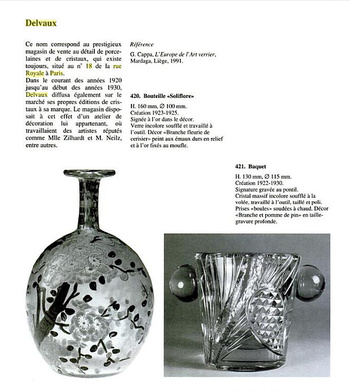 I have got this set (part of a set in fact) for a long time now. They're three perfume bottles and a lidden box. The four of them are marked "Delvaux - 18 Rue Royale, Paris" at the bottom, written with enamel.

As far as I know, Delvaux was "Luxury retail shop that had its own glass-decoration workshop during the 1920s-30s. Usually signed "Delvaux, 18 Rue Royale, Paris" in enamel on base".

They're not the kind of glass I usualy look for but it was a present and has been half forgotten for at least ten years... When I first got them I could find no information at all about Delvaux... now there's not a lot, but at least I can even find some literature about it. The last pic comes from google books: "Le génie verrier de l'Europe: témoignages : de l'historicisme à la modernité" by Giuseppe Cappa. Thanks to it I've been able to find out this design comes from around 1923-1925... I had always thought it would be from the 40s, but I think being from the 20s makes this lot more interesting :)